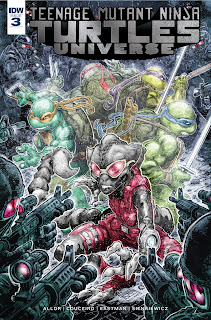 Donatello wakes up in the command center as Stockman works to activate the defense systems.  In the hallway, Raphael has had enough lip from the scorpion mutant, who introduces herself as Zodi.  He cuts her free from her bonds and tells her to fight him.  She gets a few licks in, but Raph stabs her through the hand with his sai and ends the fight.  Michelangelo and Leonardo try to calm him down, insisting that they’ll all need to work together to get out.  Donatello stumbles into the hall and asks what he missed. 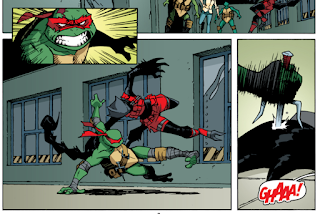 Outside, Knight and Winter are a little concerned about Agent Bishop’s strategy to deal with the mutants.  Bishop walks in on their conversation and Knight confirms that backup is on the way.

On the roof, Leo, Donnie, April and Zodi put their plan into motion.  Zodi lassos one of the floating EPF probes and gets an electric shock.  She reels it in and April places a hand on it, confirming that the probes won’t respond to human targets.  April then runs through her plan to leap to the next roof, escape into a nearby sewer tunnel and make her way back to Manhattan.  Zodi is incredulous of her skill.

Back inside, Stockman notices EPF soldiers climbing up the elevator shaft and dispatches Mikey and Raph to stop them.  Raph leaps down the shaft and begins clobbering the soldiers until Mikey throws him a line to get back out.  Raph exits the shaft seconds before Stockman gets the security defenses online, which close off the shaft with bars and lasers. 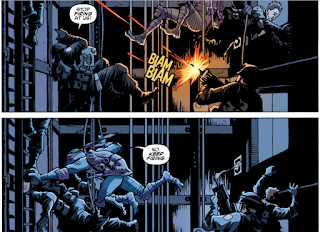 On the ground, the EPF spot April leaping across the rooftops and Bishop gives the order to shoot her.  Detective Lewis intervenes, tackling the soldier and knocking his shot just enough off-target so that the bullet only grazes April’s arm.  April makes it to the next roof and keeps moving.

Raph arrives on the roof in time to see all the craziness going down and says he doesn’t like this plan at all.  Mikey demands to know why Raph’s been so on edge lately and he explains that with all the escalating danger they’ve been facing, he’s afraid of losing his family.  Moreover, he’s afraid of being alone again.  Mikey consoles him and promises that not only will they watch out for each other, but they’ll get Alopex back, too. 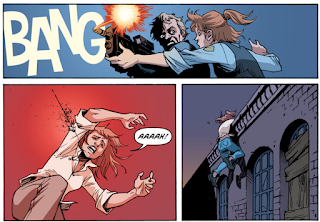 Bishop, meanwhile, orders Lewis to be detained.  She tells him he’s crazy to be treating this like a war and Bishop points to the backup choppers closing in and tells her to think again.

At the entrance of the sewer tunnel, Leonardo awaits an attack from Koya.  The attack comes from behind, and not from Koya, but from an army of rats.  Much to Leo’s surprise, he’s being besieged by the forces of the Rat King, who tells him that he has fallen into a Thin Place yet again. 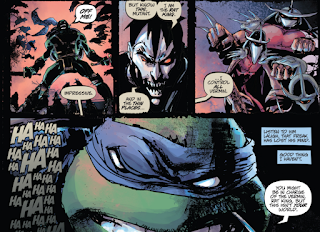 Even worse, the Rat King has brought reinforcements in the form of three monstrous Shredder doppelgangers: A huge hulking Shredder, a lanky lobster-clawed Shredder, and a tiny midget Shredder.  Leo leads them down the tunnel and into an open area of the sewer.  He escapes them and leaps onto a pedestal, but a huge Oriental dragon rises from the pool of water below.  The dragon tells Leo that he is his destiny and breathes fire at him.

Leo dives into the water and searches for a way out.

*Mikey mentions that Alopex is missing.  She disappeared in TMNT (IDW) #60.

*Leo last encountered the Rat King in the Thin Place in TMNT (IDW) #36.

*The monstrous Shredder doppelgangers are homages to the Mutant Shredder Clones that originally appeared in TMNT (Vol. 1) #20.

Her sarcastic and matter-of-fact response to just about every predicament so far has made her an amusing villain to deal with.  She’s very smug, but she also isn’t infallible or untouchable.  Raph gets the best of her in their fight and she gets a solid zap from that probe, too.  She certainly takes it on the chin a lot.  But regardless of whatever injury is inflicted upon her, she always responds with a wry comment or just shrugs it off like it doesn’t matter.  It’s very endearing.

April gets to shine in this issue and she’s been a strong player through this opening TMNT Universe arc.  Her pragmatic attempts at infiltration, subterfuge and ultimately knowing when to cut and run takes me back to how she was portrayed in her Micro-Series issue some years back.  We haven’t gotten to see enough of THAT April in the intervening years and I’m happy to see the portrayal make a comeback.

The bit where she confidently asserts “I’m April O’Neil” to Zodi was done with just the right balance of emphasis and corniness, too.  Much like how Casey has been recovering in the pages of the TMNT ongoing during the “Chasing Phantoms” arc, April’s getting back on her feet quite nicely in this storyline.  They’re major players in the TMNT mythology, so it’s about time they were allowed to pull their weight again.

There’s a surprising amount of continuity dropping in this installment, with Raph’s heartfelt speech about loneliness (which Zodi appropriately gags to) referencing many of the hardships he and his brothers have endured since things began.  He’s right in that they’ve been experiencing a lot of relentless momentum in the issues leading up to this arc, especially if you consider that they’re also just coming off of the Bebop & Rocksteady miniseries, so his exhausted, frustrated breakdown has some justification in-context.

Mikey soothing his spirits by promising to get Alopex back was maybe a little out of left field, though.  If there’s supposed to be some great romance or infatuation between Raph and Alopex going on, I think I must have slept through it.  They haven’t spent nearly enough page-time together to warrant the kind of passion and concern IDW is trying to get at least Raph to express.

Action-wise, this was a relatively adrenalin-fueled issue.  We got a meaningless boxing match between Raph and Zodi (addressed as meaningless by the cast, so it’s cool), a pretty sweet wire-fu fight in the elevator shaft, and some tension when April nearly takes a bullet while crossing rooftops.

Couceiro’s layouts are aces in this issue and I think he deserves some props for his sense of spatial awareness.  It’s one of those things you don’t notice when it’s done well, because it’s so intuitive, but I never feel disoriented during any of his action sequences; none of that “What room are they in?  Where are they now?” stuff.  Everything flows so well, you always have a natural sense of where the characters are, where they’re going, how they got there, and so on.  It may not sound like a big whoop, but trust me, when an artist is bad at it YOU NOTICE.

As for the backup, we’re getting even more villain cameos, this time from some bad guys who haven’t even appeared in the IDW continuity yet.  While it’s kind of a drag that the Mutant Shredder Clones have been relegated to hallucination territory, it was cool to see them even in this limited capacity.  Was that big red Oriental dragon supposed to be Hothead/Warrior Dragon?  I dunno.  Probably not, but maybe.  There’s been a lot of fanwank in this backup strip so far.