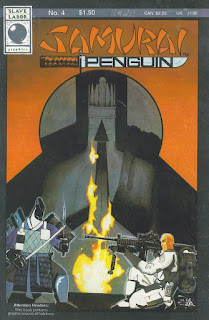 In this parody of Boris the Bear, the self-righteous bear Borax, who hates indie comics starring anthropomorphic animals, gets a taste of his own medicine.  All the characters he once trashed gang up on him, including Samurai Penguin, Cerebus the Aardvark, the Miami Mice, Miyamoto Usagi, and the Teenage Mutant Ninja Turtles.

The Turtles only appear in one panel.

*"Borax the Bear" is the back-up comic.  The main feature is unrelated.

*The Turtles previously joined Samurai Penguin and all those other characters in getting their revenge on Boris the Bear in Laffin' Gas #5 (which was published only 3 months before this issue).

Whew, I'm really at the dregs, now.  Can there possibly be anymore of these one-panel cameos from the TMNT in old black 'n white indie comics?  Hell, I'm not even sure if this was a legal cameo or not.  Probably just a gag covered under parody law.  But since I'm covering all the OTHER Boris the Bear shit on my site, why don't I just knock this one out?

Anyway, coming three months after Laffin' Gas #5, the "Borax the Bear" comic feels a little past its due date.  The Laffin' Gas story seemed to have cleared the air between Boris and all the indie comics characters he lambasted, Samurai Penguin included, so I'm not sure why this lingering bit of animosity was needed.  Though there is something gratifying about seeing Boris the Bear rendered as a shitty parody that showcases his dullest elements.  So I guess there's some merit to this one.