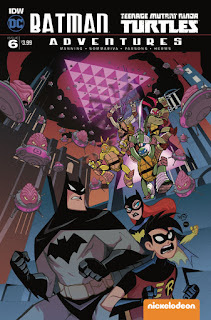 "Epilogue: The Terror of the Kraang"

Gotham City.  Bruce Wayne and his new ward, Tim Drake, are attending a showing of "The Grey Ghost and the Men from Planet X" at the Fox Foundation Film Festival when suddenly Kraang portals open up everywhere and an all-out alien invasion hits Gotham!  Batgirl is already in the thick of things, but Bruce and Tim quickly suit up as Batman and Robin, joining her in the streets. 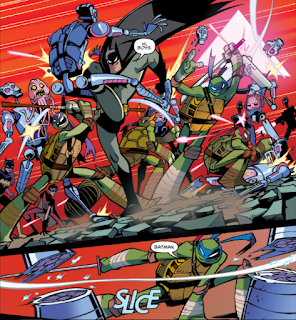 Before they can be overwhelmed by Kraangdroids, a new portal opens up and out pop Leonardo, Donatello, Raphael and Michelangelo (much to the new Robin's further confusion).  They reveal that when the Mad Hatter used the Kraang portal tech, the Kraang were monitoring him and were able to zero-in on Gotham City's dimension.  When Raph spotted some Kraangdroids with a portal generator while on patrol, the Turtles followed them.

As Mikey introduces himself to the new Robin, he tells him all about their encounter with the Scarecrow and how his fear gas made Leo and Raph go crazy.  Batman gets an idea and tells Raph to come with him to Arkham while Leo and the rest stay behind and keep the Kraang under control. 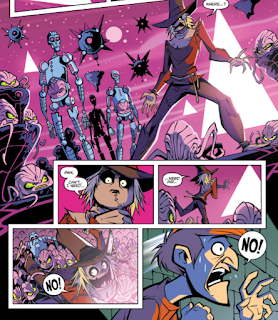 At Arkham Asylum, the Scarecrow awakens from a nightmare.  Apparently, while traveling through the Kraang portal to the TMNT's dimension, he made a brief detour into Dimension X where he was nearly snagged by a Kraang.  Batman and Raph confront him to ask for his help, thinking that his fear gas might be able to drive the Kraang back through their portals and keep them from ever wanting to return to Gotham.  The Scarecrow reveals that he had already planned for this and, during his most recent excursion into Gotham, filled the police blimps with a specially modified version of his fear gas (having used Kraang DNA he obtained while in Dimension X to make a special strand that would only affect Kraang and mutants). 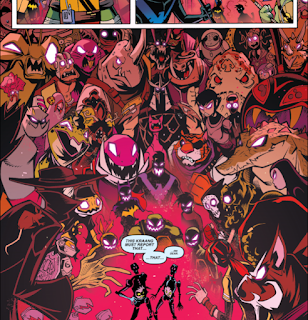 While Nightwing joins the fray (interrupting Donnie's clumsy flirting with Batgirl), Batman uses the Batwing to coordinate the police blimps into venting the gas above the city.  Unfortunately, the one above Gotham Square fails to vent, leaving Raph to eject from the cockpit and slash the blimp with his sai.  This releases the gas, but Raph falls under its spell, now seeing cockroaches everywhere.  As for the Kraang, they begin to see mutant and ninja foes from the TMNT's dimension everywhere around them.  Terrified, they flee back to Dimension X.  The Turtles, luckily, are using their Dimension X atmosphere converters, protecting them from the gas (but not Raph). 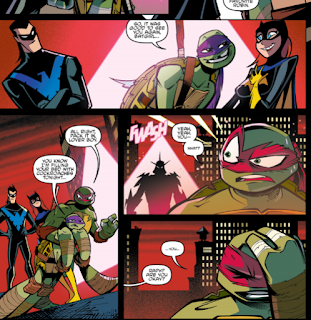 Later, the Turtles bid the Bat-Family a fond farewell as they return to their dimension.  Raph momentarily thinks he sees the Shredder in a Kraang portal, but brushes it off as lingering effects from the gas.  With the day saved, Robin confesses to Batman that he'd like to see the rest of the cheesy sci-fi movie that began their evening.

*This story is continued from Batman/TMNT Adventures #5.  For the Nickelodeon TMNT, their story continues in TMNT Amazing Adventures: Robotanimals #1.

*This installment takes place a few months after the previous issue.  For the Turtles, it looks to take place between seasons 4 and 5 of the Nickelodeon TMNT cartoon.  For Batman, it takes place during The New Batman Adventures, sometime after "Sins of the Fathers" (when Tim became Robin).

*Evidently, Sommariva had video games on the brain when he drew this issue.  A kid dressed like Ness from Earthbound and a kid wearing a Legend of Zelda t-shirt can be seen on page 14.  And if you look below Renet, you'll see Mega Man hiding in the Kraang hallucination of TMNT characters on page 17.

So, I'll say off the bat that this issue seems like an afterthought.  Like, they'd originally plotted a 5-issue miniseries and then suddenly got permission to do a sixth issue and now "Oh shit!  We gotta come up with SOMETHING!"

As hasty as this story is, I think Manning and Sommariva managed to throw something pretty entertaining together, even if it is a rather clumsy drop off in quality from the previous installments.  I mean, c'mon.  So the Scarecrow just happens to have created a Kraang-oriented strain of his fear gas and just happens to have been filling the Gotham police blimps with it because he just happens to have been having prophetic nightmares about their impending invasion?  It's some pretty half-assed stuff and you can tell from the getgo that nobody at IDW thought they were going to have to make this issue.

But as convenient as the resolution of the conflict is, the story finds lots of places to have fun along the way.  The Turtles and the Bat-Family treating each other like old friends was absolutely great and I loved every minute of that.  The Turtles just slip right into a comfy dynamic with the Dynamic Duo like they were the Flash or Green Arrow or any other DC character having a routine team-up.  It makes this issue feel less like the sixth part of a storyline and more like a one-shot sequel to an earlier miniseries.  The groundwork for the relationships between the characters has already been built, so they can all just say "hi" and get down to business.

While the story is definitely a slapdash sort of thing, Sommariva's art is as good as in his other five installments.  That half-page splash of all the fear gas-created TMNT characters was some fun Where's Waldo stuff and squinting into the margins and crevices will reward you with Armaggon and Mutagen Man, among others.  Also, uh, Mega Man.

If there was any real missed opportunity to this issue, I think it was that for a story where the Scarecrow plays such a pivotal role, they didn't frame it in a way that drew comparisons between his New Batman Adventures design and his Nickelodeon TMNT doppelganger, the Rat King.  The previous issue even ends with the Scarecrow designing his New Batman Adventures costume, but he doesn't wear it in this story (as he spends the issue in Arkham, clad in a patient's uniform).

I dunno, man.  You got two bad guys, one from each show, both dressed in spooky black Southern Baptist preacher outfits, both voiced by Jeffrey Combs, you set up the appearance in the last issue, and then... What, nothin'?  Just a little disappointing.  Or maybe I'm just being a little bitch because the Rat King is my favorite TMNT villain and the Scarecrow is my favorite Batman villain and God forbid a bunch of complete strangers writing a comic should indulge my extremely unique expectations.

Anyhow, this wasn't the best ending to the miniseries, to be honest.  And I think that's because the narrative of the miniseries ended last issue.  This felt like a sequel miniseries that got condensed down to one issue and no one really benefits from that.  I mean, I'm glad we got it, because it gave us one more month of Batman and the Ninja Turtles hanging out, but the actual plot just isn't very good.