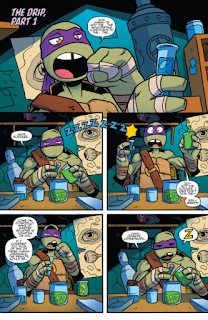 In his lab, Donatello is working on a retro-mutagen that will turn Splinter back into a human.  Unfortunately, he's been working himself ragged and falls asleep while mixing chemicals, causing an explosion.  Leonardo suggests that Donnie take a week off from science to help him refresh, as he's been overworking himself to the brink.  Meanwhile, Michelangelo and Raphael get into an argument over a new beverage called Refresh-Ade that's supposedly super-charged with electrolytes.  When no one's looking, Donnie sneaks the bottle of sports drink into his lab. 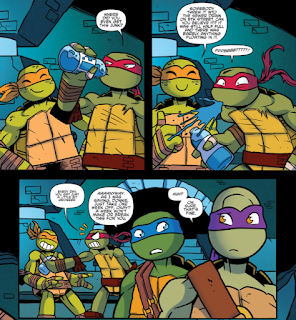 Doing science in secret late at night, Donnie tries adding the Refresh-Ade to his retro-mutagen mixture, hoping that the added electrolytes will act as a stronger bonding agent.  Instead, the chemical concoction mutates into a cute little droplet-shaped creature.  Naming him "Drip", Donnie decides to keep him as a pet and puts him in a glass jar. 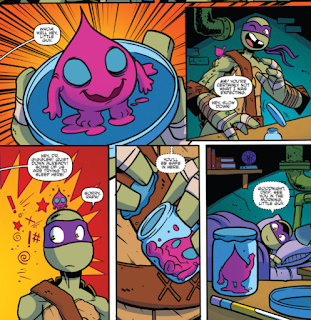 The next day, Donnie continues to keep his experiments a secret from his brothers, as he's supposed to be on vacation.  He finds that Drip is melting and gives him a drink of water, which returns Drip to normal.  Later that night, Drop escapes from his jar and goes exploring around the lair, absorbing all the liquid he comes across.  Eventually, he finds his way to the sink.

Waking up, Donnie finds his bedroom completely filled with water and he's only moments away from drowning...

*This story is continued from TMNT Amazing Adventures #12.  The story continues in "The Drip, Part 2".

So this is gonna be one of those stories where a cute, unassuming little critter is adopted as a pet by the protagonists only to prove to be an unstoppable troublemaker, right?  I think I've seen this before in an '80s cartoon.  Which '80s cartoon?  ALL the '80s cartoons!

It's a stock plot, but we're dealing with a cartoon tie-in comic for little kids here, so let's be reasonable about where the bar is set.  The art's cute and Manning's dialogue for the Turtles is full of a lot of hyper jokes that land enough to make you smirk.  But with 3 pages rendered as text-less pantomime, you're going to breeze through this half of the two-parter in no time flat.

Also, Raph calls Donatello "Dr. Giggles" in one scene.  You ever seen that movie?  Of course you haven't.  Larry Drake was pretty good in it, though.