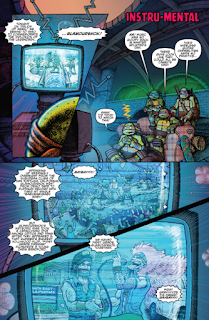 The Turtles gather around the TV to watch an episode of Relics of Rawk, this time focusing on the hair metal band Glamourshok.  They were the biggest icons of the music scene until 1990, when they chose to co-star with Chris Bradford in the film "First Grade Fireman" and the fiasco summarily ended their careers.  Inspired by the documentary, the Turtles decide to start their own band.  Master Splinter approves, so long as they practice far, far away from the lair.

In an abandoned garage, the Turtles set up their instruments (which Donnie fished from the garbage and repaired).  They begin rocking out and the noise travels all the way to Foot Clan HQ.  Thanks to his metal helmet, the Shredder finds the racket unbearable and orders Baxter Stockman to send some Foot-bots to eliminate the noisemakers. 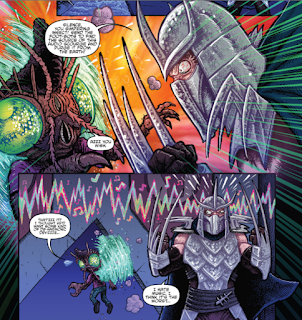 At the garage, the Turtles are so proud of their musical abilities that they decide to cut a demo tape.  No sooner does Donnie hit record on the boom box, a unit of Foot-bots attack.  The Turtles decide to thrash them with their instruments, playing and singing lyrics all the while.  They destroy the Foot-bots, but their instruments are toast.  Luckily, the boom box recorded the whole thing and Donnie knows just what to do with the demo tape... 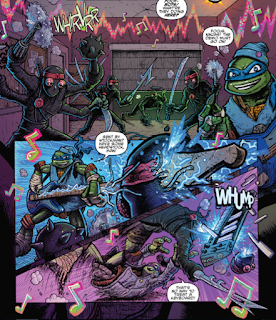 At Foot Clan HQ, Stockman and Rahzar wander into the throne room, as the music has gotten closer.  They find the book box on the floor, playing the demo tape.  As Shredder stomps in, Rahzar destroys the boom box and Stockman promises him that they've taken care of the noise.  Little do either Shredder or Stockman know, Rahzar has saved the demo tape, having enjoyed the tunes.

*Chris Bradford's history as a (talentless) TV and film star was revealed in the Nickelodeon TMNT season 4 episode, "The Weird World of Wyrm".

*Raph mentions that he already has a drum set.  That's true!  A drum set has been part of the decor in his bedroom since the show started.

*The Shredder's hatred of music is a reference to his part in the infamous Coming out of their Shells Tour.  And in case you think I'm reaching, the Shredder even paraphrases lyrics from his song, "I Hate Music".

The back-ups are still the best part of Amazing Adventures and this one was a doozy.  Moody's art style is way more "experimental" than some of the other artists who have appeared in this title.  They tend to go for a slicker or cuter aesthetic, but Moody's is heavily detailed and, fittingly enough, looks more like something you'd see in Heavy Metal magazine.  It's wild and dark and cross-hatched to Hell and back, but it'll definitely stand out amongst all the other back-up artists.

Goellner's script does that thing his scripts usually do, where maybe he plants a few too many Easter egg references for giggles.  Well, it depends on how much you love or hate that stuff; there weren't any in this issue that I'd want excised.  Okay, so maybe Shredder reciting lyrics from his Coming out of their Shells Tour song was a little much, but can you argue that it didn't fit the plot?

If anything, Goellner did his research and the references are less gratuitous and more organic.  Like Raph already having a drum set on hand or, my favorite, the whole bit about Chris Bradford's embarrassingly bad movie career in the late '80s and early '90s.  The "cartoon within a cartoon" gag that has kept up with each season of the Nick cartoon has been one of my favorite running jokes, and of them all, Chris Bradford's 2 Ruff Crew in season 4 was my favorite.

Anyhow, the A-stories have been a bit milquetoast in the backend of TMNT Amazing Adventures (which is one issue away from cancellation), but they have been knocking it out of the park with these back-ups.  While this title is easy to ignore (and judging by those Diamond sales numbers, it WAS ignored), I think you might want to back issue bin-dive for a few of them, if only for the back-ups.