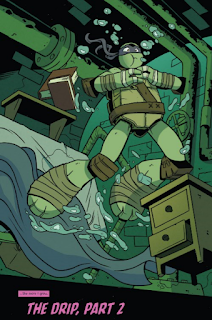 With the lair flooded, Donatello swims out into the living room and finds his brothers and Splinter already paddling for the exit.  They escape to the surface through a manhole and Donnie explains what the Drip is where it came from.  Master Splinter tells Donnie that he does not need a cure and is content as he is.  However, he needs his home back, so Donnie comes up with a plan. 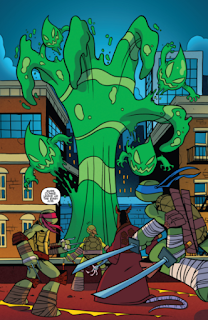 Suddenly, the Drip sends a geyser of living water up the manhole which turns into a bunch of hands and attacks the Turtles.  Donnie tells his brother to distract it while he takes care of the Drip.  Diving back into the lair, he finds the Drip floating around and, with a canister of liquid nitrogen, captures it. 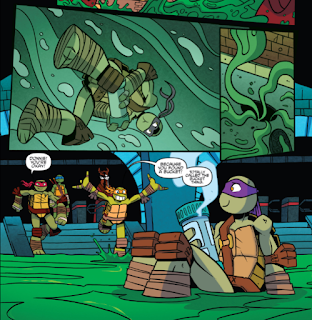 The lair drains and Donnie stores the canister containing the Drip in the freezer next to Ice Cream Kitty.  Donnie promises his brothers that he'll take a break from science for a week.  Mikey says he'll pick up the slack and unveils his latest invention: The Edible Pizza Hat.

This story is continued from "The Drip, Part 1".

This entire story was ehhhhhhhhh.

A pretty lackluster way to end this ongoing (though there's still the back-up).  This has got to be the dullest story IDW has ever put out.  I mean, the art is cute and the original threat is a welcomed break from the usual bad guys, but it's all just so by-the-numbers and ho-hum.  It even ends with Mikey making a lame pizza joke.  I swear, if you just hit the "randomize" button on the Automatic Ninja Turtles Story Generator, this would be your result.

TMNT Amazing Adventures died the way it lived.  With a yawn.

But there's still the back-up.  Let's check that out.