Remember that One Time...? 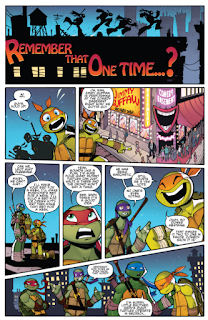 While out on patrol, Michelangelo sees that his favorite comedian, Jimmy Guffaw, is doing a routine at a local comedy club.  He begs Leonardo to let him go see, but Leo tells him it's too risky and they all go back to the lair.

Pouting in his room, Mikey whines that he never gets to have any fun.  Suddenly, a time window opens up and Renet enters, saying she saw how down in the dumps Mikey was and wants to take him back to the funniest moment in his life.  Mikey knows exactly when that was, the day Leo slipped on a banana peel, and together they travel back in time one year. 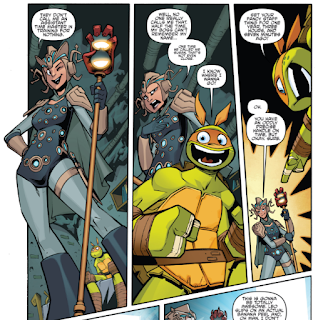 They arrive in the tunnels, just as the past-Turtles are returning to the lair.  Mikey suddenly changes his attitude and makes Renet hide.  He tells her that this was the funniest day of his life, but also the scariest, as shortly after Leo slipped, Mikey encountered "the Mud Man from Beyond."

Mikey peeks around the corner and catches Leo slipping, but fails to contain his fits of laughter.  Slipping, Mikey falls into a pit of mud and gets covered from head to toe.  Past-Mikey hears the commotion and goes out to the tunnels to check, spotting the "mud man" and running away in terror.  Mikey and Renet share a good laugh and return to the present. 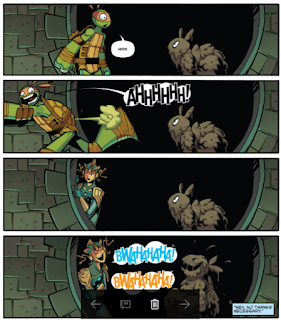 Mikey thanks Renet for cheering him up and bids her farewell and she steps into her time window.  Leaving his room, he finds his brothers all laughing at Raph, who has slipped and fallen into some spaghetti.  They tell Mikey he shouldn't have missed it, but Mikey insists he'll just catch "the rerun".

*This is the last issue of the series.  The next IDW comic based on the 2012 Nickelodeon TMNT cartoon will be Batman/TMNT Adventures #1.

Not the best back-up Amazing Adventures has done, but it was better than the A-story.  I'll stand by my earlier assertion that the back-ups were the real gold in this series, though I'm not sure if that's as wonderful a compliment as I want it to be.  When the A-stories were often so bland and forgettable, the back-ups didn't have to try very hard to be better.

As for Amazing Adventures as a whole, I guess my final thoughts on it are that it was a major let down.  When it was announced, and even when it began, it seemed like it was going to correct the course the previous series, New Animated Adventures, had been headed down.  The editor had said they'd been given license to deviate from the continuity of the cartoon and the opening storyline seemed to be making use of that freedom.  We got a new villain who was intimately connected to the origins of the protagonists and even a direct showdown with the Shredder (something New Animated Adventures had refused to do out of fear of contradicting the cartoon's canon).  Even the second storyline showed some ambition, recounting the origin of the Mighty Mutanimals whereas the cartoon had glossed over that bit of backstory.

But from there, Amazing Adventures recoiled right back into the formula from New Animated Adventures.  Fun, light-hearted stories, yes, but no ongoing narrative, no deviation from a status quo, and no ambition whatsoever.  As I'd said a hundred times before, Amazing Adventures lacked a hook, and now you understand why I'm reviewing the last issue a year after it was published.  Who the fuck even CARES?

The thing is, these comics aren't BAD.  I'm complaining that this title isn't what I want it to be, and for what it IS, Amazing Adventures was perfectly fine.  But that's all it ever was.  "Fine".  Not good, not bad, not even memorable save for a few of the more clever back-ups.  It never shot for anything more than "fine".

IDW's comics based on the 2012 Nick cartoon will survive Amazing Adventures in the form of two consecutive miniseries.  What I don't get is why IDW decided to introduce ongoing, serialized storytelling at the very end in the form of those last two minis?  Perhaps if they'd let their ongoing comic based on the show tell an ongoing story, the audience would have been more excited about the book.