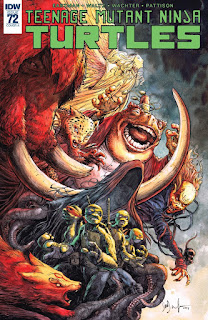 In the Den of Delights, the Turtles have been de-cloaked by the Rat King and the Pantheon slowly moves in to take them. 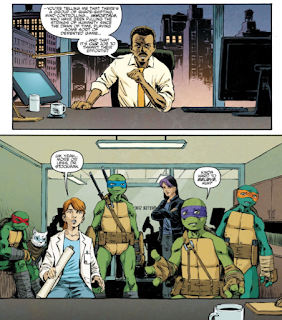 Earlier.  The Turtles, April, Angel and Alopex pay a visit to Baxter Stockman at the TCRI Building to tell him all about the Pantheon and recruit his help in thwarting them.  While Stockman has no problem believing in the Pantheon, he wants to know WHY he should help.  April explains that the survival of the human race is at stake, but when that doesn't sway him, she tempts him with mention of the vast store of knowledge the Pantheon holds and how profitable obtaining that knowledge might be.

Stockman agrees to help, but demands to know what the plan is.  Leonardo tells him that with the coordinates to the Den of Delights retrieved by Angel and Alopex, they can use Harold's teleporter to get there.  Once in, they can use the Street Phantom cloaks to remain invisible and spy on the Pantheon.  All Stockman has to do is work the controls of the teleporter and troubleshoot while they're gone. The present.  Leo calls Stockman to activate their transponders and pull them back to Earth, but the interdimensional interference is making it impossible for him to lock onto their signal.  Meanwhile, Jagwar attacks Mikey and breaks his transponder.  Leo and Donnie are pursued by Manmoth, only to be stopped by Kitsune, who momentarily takes over Donnie's mind.  Jagwar tries to strike Leo down, but Raph gets in her way.  Seeing Raph in trouble snaps Donnie out of it, but not before Raph is seized by Gothano's tentacles.  Before Gothano can strangle Raph to death, Stockman succeeds to teleporting him back to Harold's lab.

Leo and Donnie are then left to take on Manmoth, but they can't put a dent in the huge bruiser.  Manmoth is about to crush Donnie, but luckily the Turtle is teleported away at the last second.  The Pantheon then gang up on Leo and Mikey, only for Leo to get teleported away.  Unfortunately, with his transponder broken, Mikey cannot be teleported back.  The Rat King sics his rats on Mikey and they swarm him with ravenous intent.  Aka then intercedes and insists that the only reason the Turtles invaded their feast is because Kitsune and the Rat King invaded their lives first.  She insists that Mikey be set free, but the other Pantheon members aren't buying it.  Leo then teleports back to the Den of Delights, grabs Mikey, and they teleport back to Earth together.  With his Den trashed, Toad Baron tells his siblings that the party's over. 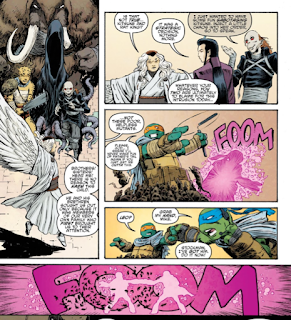 Back in Harold's lab, everyone wants to know what the Turtles learned before they were compromised.  Leo reveals that they didn't get much, but they now know who they're up against and what their motives and goals are.  He hopes that may be enough to fortify Clan Hamato against the next Pantheon attack.

*Baxter recalls the defeat of General Krang, which he was present for in TMNT (IDW) #44.  He also recalls his encounter with Harold in TMNT Micro-Series #3: Donatello.

*TMNT/Usagi Yojimbo #1 takes place between this and next issue.

You know, I really dug this arc.  It was light, with the first half consisting of villain introductions and the second half consisting of the Turtles running for their lives, but there was a lot of payoff in these two issues.  We learned everything we've been dying to know about the Pantheon since the characters first started trickling in and the Turtles finally have a game plan formulating to take the fight back to them.  We've been watching the Pantheon fuck around with them so much over these past few years, so it's quite gratifying to see the Turtles hit them where they live for a change, even if all their efforts amounted to was a ding-dong-ditch.

And we just got off a few pretty heavy duty arcs in both the main series and TMNT Universe, so a breezier two-parter like this comes off as akin to a "break" for the characters and the reader.  There's still action and intrigue and all that, but it isn't necessarily an "event" storyline, either.  Every series needs arcs like these for punctuation if not pacing.

If anything, I'm now re-interested in the Pantheon.  If my last review hadn't made it clear, I was growing a bit bored with their shtick and on the cusp of no longer caring what their machinations are.  But now we know their whole roster, what their gimmicks are, and better yet, all of them are now aware of the Turtles and soon to take an interest in them.  Are we going to get stories where Jagwar challenges them to a duel for warrior's satisfaction?  Manmoth tries to hunt them as the ultimate sport?  Gothano begins to haunt and spook them from the shadows?  There are more stories to be told with these characters and I'm interested and invested in them again.  So it's nice to have gotten that jumpstart, even if I still think they dragged the mystery out too long.

Other than that, the only thing left to discuss is the alliance with Baxter Stockman.  They struck it up some time ago in the first TMNT Universe arc, but this is our first instance of really seeing them work together as a team.  It's bizarre and awkward, but it's also organic.  Baxter isn't their friend, he's more like their business partner and they have to go through the "what's in it for me" rigmarole to get him on board with their scheme.

All-in-all, I think I got more mileage out of this story than others might have.  My personal preference in comics leans towards shorter storylines over epic events, so it might just be a matter of taste.  But "Feast of the Pantheon" feels like more of a gamechanger and the dawn of a new narrative than anything else we've gotten since "Vengeance".  And it did so in two well-paced, economical issues.