One of our Turtles is Missing! 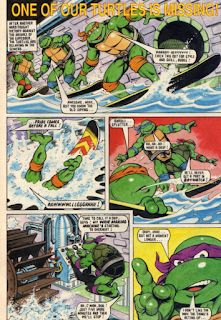 Down in the sewers, the Turtles are testing out Donatello's new wave machine with their surfboards when it overheats and explodes.  Donnie is caught in the explosion and swept out to the beach.  He awakens, but with... AMNESIA! 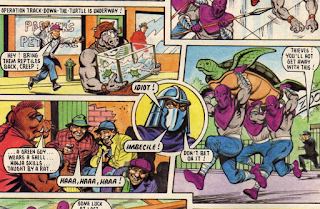 As the Turtles search the sewers for Donnie, a Foot Soldier spy hears that one of them is missing and reports back to the Shredder.  Figuring this is the best time to pick a solo Turtle off, Shredder orders the Foot Clan to hunt Donatello down.  They eventually find him out by the tracks, but he doesn't know who they are.  Sensing an opportunity, Shredder introduces himself as "Mr. John Smith" and invites Donnie back to his home for supper.

At the Technodrome, Donnie fills up and asks Shredder how he can repay him.  Shredder asks Donnie to help him defeat a trio of criminal turtles; specifically, he wants Donnie to build a Super War Machine.  Donnie isn't sure how to build it, but as soon as he starts, his muscle memory takes over and he constructs the colossal tank. 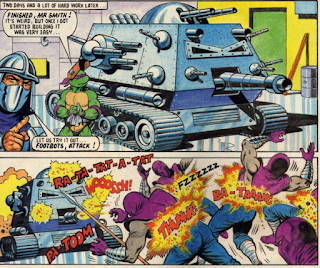 Two days later, the Turtles receive a letter from the Shredder, telling them to come out and save Donatello, if they can.  Splinter senses that it is a trap, but the Turtles head out anyway.  They find Donatello, but he lures them into the path of the Super War Machine.  The Turtles easily destroy the tank, but Donatello takes a gun from the Shredder and attacks them.  Realizing that Donnie has amnesia, the Turtles decide not to fight back and Donnie brains them all into unconsciousness with the butt of the rifle.

Later, the Turtles come to in the Technodrome, but they've been placed inside the Turtle Crusher (a glass tube with a hydraulic press on the roof.  Before the press can come down, Mikey throws a slice of emergency pizza at Donnie.  Eating it, Donnie regains his memory.  He helps the Turtles escape and together they beat the Foot Clan senseless.  Locking them in the Turtle Crusher (but not turning it on, because they're good guys), the Turtles leave. 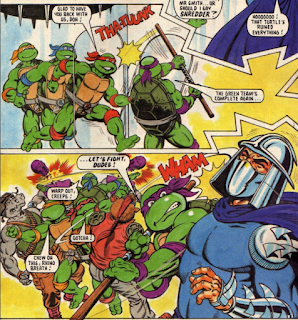 Back at the lair, Donatello apologizes to the others by making them pizzas... plain cheese pizzas.  The Turtles think he has amnesia again because he forgot the toppings, but Donnie reveals it to just be a prank.

*This story was published alongside "Hogbog the Horrible".

These UK comics are weird, but there's a sort of consistent weirdness to them.  There are ideas that are almost uniquely Fleetway, as they pop up a lot, but you'd swear on the surface that they're mistakes.  Like, the Foot Soldier robots have all been shown talking throughout this series.  Strange, but then in this issue not only do they talk, but they have inner monologues, too: 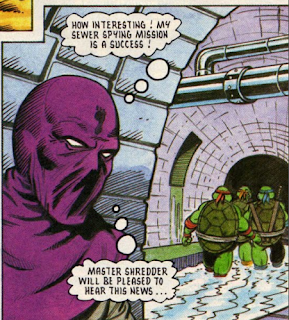 Can these Foot Soldiers feel?  Can they love?  I hope not.  Because the Turtles chop their heads off with their bear hands in this issue.

There's also the fact that the Shredder knows where the sewer lair is (he sends them a letter via paper airplane in this issue) or how the Technodrome is apparently in some place both stationary and sewer adjacent (the Turtles walk in and out of the Technodrome frequently in these comics).  All these things come across like lazy writing at first, but as I get further into the Fleetway series, I'm starting to see that the writers are keeping up with these ideas.  Maybe it WAS a fuck up at first, but now they're owning it.

This issue also tries to figure out what to do about Michelangelo's lack of a weapon.  In some panels he fights with his hands and yet in others he uses a bo staff like Donatello.  This has happened before in the Fleetway series, but it's still bizarre every time I see it.  How much longer until England finds out about the grappling hook?

Everything else about the issue is a lot of, I dunno, whatever.  It's an amnesia plot.  Nothing says "we're not even trying" like an amnesia plot.  Still, the art is lovely.  Is it Sandy James?  I don't know for sure, but those bullet blasts and explosions look gorgeous.  I suppose my only complaint about James' art, beyond the instances of tracing and copying from Michael Dooney, is that he always manages to make the pizza look like vomit.  It might be the combo of yellow goo flecked with red and green dots, but his pizzas always appear diseased and revolting.  The '80s cartoon had more appetizing pizzas and those cartoons were drawn with Korean slave labor.

Anyway, the oddities are the real reason to read these Fleetway comics.  Or at least *I* think so.  C'mon, I have to find SOMETHING to motivate me to review these things.