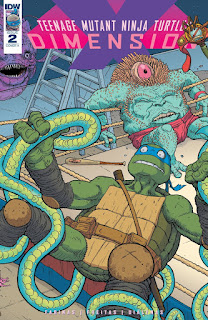 As the Hot Rod reaches the planet the second witness lives on, the Turtles and Neutrinos find themselves attacked by a giant flying angler fish alien. 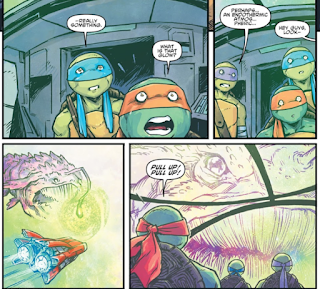 Five years ago.  General Krang orders his soldier, Anemon, to feed an Argonian prisoner to his monstrous pet.  Anemon does so with gusto, but Krang has another chore for him.  He demands that Anemon reveal to him where his people, the Sumo, store their food harvests.  Anemon fears that his people will starve if Krang steals their resources and provides fake coordinates.  Realizing Anemon's ruse, Krang has Sumo's entire home planet destroyed and orders his soldier's execution.  Sumo fights his way through Krang's guards, getting blinded in the process, and escapes on a small craft.

Later, he crash-lands on the angler fish planet and is met by a small eyeball alien named Eymo.  The two work together symbiotically: Anemon using his strength to fight off the angler fish, Eymo using his vision to help Anemon farm and survive.  However, wanting to remind Eymo of his place, Anemon grabs him and uses his head-tentacles to fuse the small creature to himself, permanently enslaving him as his surrogate eyes. The present.  The Turtles have escaped the angler fish and found Anemon, who recounts his origin to them.  He does not want to go with them to testify against Krang, as he sees no point in helping the weak.  Leonardo suggests that the warrior make a wager with him.  Raphael will fight him at breakfast, Donatello will fight him at lunch and he will fight him at dinner.  If Anemon can defeat them all three times, they will leave and never bother him again.  Anemon accepts the challenge, though Leo has an ace up his sleeve.  He tells Michelangelo to cook Anemon the heaviest, most topping-loaded pizzas he can for every meal, so that by dinnertime he'll be too stuffed and tired to fight effectively.

Breakfast comes and Anemon handily trounces Raph after eating a buffet of pizzas.  Lunch comes and the outcome is the same, with the full Anemon defeating Donnie.  Dinner comes and though Anemon is feeling tired, he nevertheless meets Leo in combat and proves too much for him.  Thinking fast, Leo removes his bandana and tells Donnie to do the same.  The two Turtles then fight him at once, appearing to Anemon to be one Turtle moving faster than he can follow.  Leo lures Anemon to the edge of a cliff and taunts him into charging.  Raph pulls Leo away at the last second and Anemon takes a tumble down the cliff, getting separated from Eymo in the process. 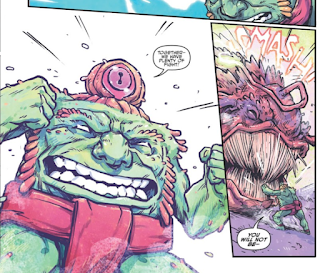 The Turtles run to the bottom of the cliff to help Anemon up, only to find the once-boastful powerhouse now panicking and blindly groping for Eyemo.  Just then, another angler fish attacks and the Turtles are helpless, as only Anemon has the raw strength to stop such a creature.  Eyemo then returns and refuses with Anemon.  Together, they hurl the angler fish away.

Later, Eyemo reveals to the Turtles that he was the one who had been talking the whole time, not Anemon.  When he found Anemon, blind and alone on the planet, the Sumo's spirit had been broken with guilt over what he had done to his own people.  Eyemo was never enslaved by Anemon, but instead spoke for him to try and restore his shattered confidence.  Raph tells Anemon that he shouldn't be consumed by his mistakes of the past but should look to the future to do something to correct them.  Testifying against Krang would be the first step.  Anemon agrees and both he and Eyemo commit to delivering testimony at the trial.

Still later, Hakk-R arrives on the planet and fends off numerous angler fish by himself.  He realizes he's arrived too late, but shrugs it off, as he doesn't see much use in a blind witness.

*This issue was originally published with 3 variant covers: Cover A by Nick Pitarra and Chris Chuckry, Cover B by Michael Dialynas, and Incentive Cover by Kevin Eastman and Tomi Varga.

Now we're cookin'.  First time TMNT writers Farina and Freitas make their debut with a pretty solid script that offers a genuine twist in the last act.  The reveal that Eyemo was the one calling the shots all along and was, in fact, an "unreliable narrator" took me by surprise.  The real Anemon was actually a depressed sadsack who let the little guy make his boasts for him.  What's nice is that their relationship was still presented as symbiotic and neither entity was a villain; I was half-expecting Eyemo to turn out to be a brain-washing parasite, but their actual bond was more complex than that.

The end result is that Anemon and Eyemo prove to be an interesting duo who, despite their similarities to other established TMNT franchise characters, can actually stand on their own as unique individuals.  But who are these older characters that they remind me of?  Well, the first one is obvious: Bellybomb. 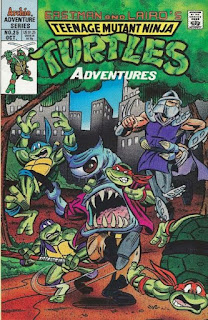 Bellybomb was an alien mercenary with a mouth on his torso and a big-ole eyeball sprouting up between his shoulders where a head should be.  Visually, he looks rather similar to Anemon/Eyemo, though on a character level they're nothing alike.

The other character that immediately came to mind once I saw the dynamic between Anemon and Eyemo was Muckman and Joe Eyeball. 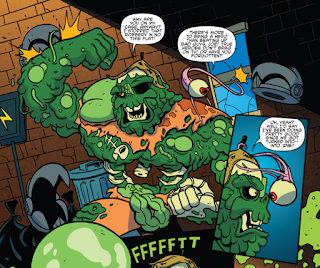 One is an ugly green dude and the other is a tiny eyeball creature that acts as his lookout or conscience (depending on the continuity).  But again, it's a superficial connection at best.  I think that's rather impressive, that Farina and Freitas could introduce a character with numerous surface similarities to other old school TMNT guys, but still carve out a niche for him that makes him stand apart.

Dialynas is an old hand at the IDW TMNT series by this point, and I've said a lot about his style in past reviews, but I again think his work looks quite good.  And his colors are especially nice.  The alien world has a strange, faded glow to it which gives it that exotic aesthetic.  It's instantly other-worldly without having to go overboard on the landscape details.

While Dimension X got off to something of a bland start, this issue stepped it up a notch.  It isn't perfect (there's a subplot where Raph spontaneously doesn't want to help the Neutrinos anymore and wants to go home, but he learns the error of his ways in time to give Anemon a clumsy speech about how helping others is important), but there's more challenge to this script than the previous one.  Anemon and Eyemo are interesting new characters and I look forward to seeing more of them in the eventual trial.

Though I do wonder if Zak and Kala are ever going to say or do anything in this miniseries.