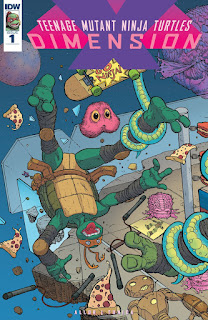 Orbiting the planet Go'Mo, Hakk-R catches up with the Turtles who are looking for the first witness on the surface.  Down on Go'Mo, Raphael and Michelangelo start to get into an argument until Leonardo warns them to cool it.  Go'Mo's atmosphere apparently feeds off of emotional energy, so they have to be careful.  Donatello then finds the witness, a blob-thing named B'een Go, inside a nearby cave. 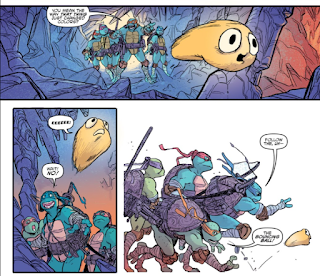 Leo tries to convince B'een to come with them back to Planet Neutrino to testify in the trial of Krang, but B'een doesn't trust them.  Hakk-R then pops in and warns B'een that the Turtles are assassins.  B'een sides with Hakk-R, who escapes with him, sealing the cave on his way out with an explosive.  As they return to Hakk-R's ship, B'een tells him of how Krang enslaved his people and forced them to use their empathic skills to interrogate prisoner's of war.  Hakk-R then sets him down inside his ship and reveals his true identity as the assassin and preps a weapon to kill the witness. 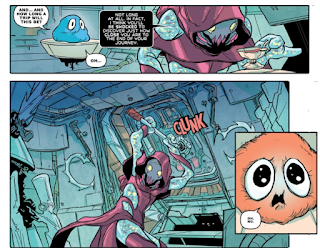 Inside, the cave, Raph gets so angry that he smashes through the boulders blocking the entrance.  Donnie realizes that they can use the planet's "emotion-based physics" to catch-up to Hakk-R and the Turtles start flying.  Raph reaches Hakk-R's ship first and tears his way inside.  He rescues B'een, forcing Hakk-R into a crashlanding. 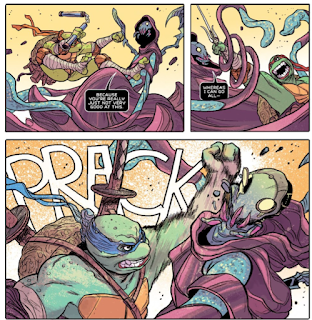 Hakk-R chases Raph outside and engages the Turtles in a fight.  Under normal circumstances, the Turtles would be sorely outmatched, but Leo uses the planet's empathic physics to uppercut Hakk-R over the horizon.  Realizing the truth, B'een agrees to accompany the Turtles back to Neutrino and testify against Krang.  Zak and Kala then pull up in the Starmobile (or the "Hot Rod" as the Turtles call it) and they leave the planet, hoping that the damage Hakk-R's ship has sustained will set him back for a while.

Elsewhere, Hakk-R watches the Hot Rod fly off and decides not to get mad about it, continuing back to his ship.

The Dimension X mini gets off to something of an OK start, with an opening chapter that's fun if not exceptional.  The conflict relies heavily on B'een acting like a moron and trusting the guy that looks like a grim reaper octopus, while the resolution relies heavily on a deus ex machina mentioned offhandedly at the start of the issue.  It's not the most ambitious script in the IDW TMNT canon, but hardly bad.  Just, I dunno.  Middle of the road, I guess.

What's more exciting is that Dimension X is going to be another weekly series throughout the month of August.  They did this same thing last year with Bebop and Rocksteady Destroy Everything and that was a trip.  I'm hoping this becomes something of an annual tradition for IDW.  I'll gladly spend the money.

Dimension X is something of an oddity in terms of narrative; it's a detour story arc taking place within another story arc in the main series (the aptly titled "Trial of Krang").  It reminds me of when DC was doing the Infinite Crisis miniseries back in the mid 2000s.  You had to buy the Infinite Crisis miniseries, but in the middle of it was another miniseries called The OMAC Project that you also had to buy in order to follow the plot.  Then in the middle of The OMAC Project, you had to stop and buy ANOTHER miniseries (actually a story arc in Superman) titled Sacrifice.  And then when all that was done, you still had to buy a one-shot special to tie-up the narrative.  Oh, and three other miniseries, too.

That was when I stopped buying DC comics.

Not saying Dimension X is anywhere on that level, but it is that sort of "story within a story" thing that I can see getting on the nerves of casual readers who just want to be able to read two consecutive issues of the ongoing without having to scratch their heads.

But Dimension X looks to be more intuitive with a plot that's like an "item collect" side quest in a video game.  The turtles completed Level 1, but now they have to gather up all those witnesses if they want to move on to Level 2 in the main series.  Hey, it's not that bad when you look at it that way.

Hakk-R seems sort of overpowered as a baddie.  This is his third encounter with the TMNT so far and he's pretty far beyond them in terms of fighting skill.  If it weren't for the aforementioned deus ex machina of the emotions planet, Leo wouldn't have been able to knock him down for the count.  I do like villains that are out of the TMNT's league, though if Hakk-R is THIS fucking strong, you have to wonder why he takes orders from anybody.  Krang never gave the Turtles the kind of trouble Hakk-R does.

I dig Tunica's art.  Is he going to be the artist for the whole series or is it going to shift around like Bebop and Rocksteady did?  Whatever the case, his pencils and (especially) colors are lovely.  His Turtles might be a little uglier than some folks like, but I appreciate the aesthetic choice since the Turtles are often bordering on "too cute" in the main title.  He draws their bandanas with a very big knot in the back that raises the tapering cloth strips up.  It looks like a... I dunno what you'd call it.  A Japanese ponytail?  The kind you see in period samurai flicks.  I'm betting that was the visual intent, and it's a clever effect.

All in all, while I wasn't wowed by this opening chapter, I still thought it was pretty good.  The promise of the miniseries is bright and it looks like there are even crazier adventures ahead.  If the covers are to be trusted, we're gonna get space-wrestling.