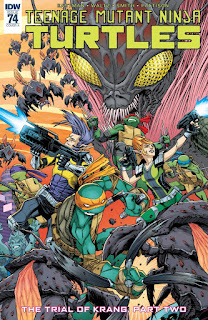 "The Trial of Krang, Part Two"

In Dimension X, the Hot Rod is being pursued by the Malignoid Swarm.  Zak and Kala call on Ace Duck to play gunner and he keeps the Swarm back long enough for them to reach backup in the form of Commander Zom and her Triceraton forces.  They fight the Swarm back, allowing the Hot Rod (containing the Turtles and the witnesses) to reach Smada City on Planet Neutrino.  Once there, Commander Dask has the witnesses escorted into protective custody, unaware that Hakk-R is watching from the rooftops. 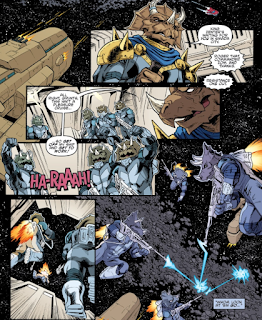 At the royal palace, the Turtles reunite with Princess Tribb while King Zenter and Queen Gizzla get a sitrep from Commander Zom.  Her Triceratons were successful in driving the Swarm's first wave back, albeit at the cost of several lives.  In exchange for the continued aid of the Triceratons, King Zenter vows to find a planet for them which the nomadic race can claim as their new homeworld.

As the trial begins, the Turtles join the royal family in the palace to watch the event, while Donatello joins the Fugitoid in the courtroom to assist with the prosecution.  Judge Gorath enters and opening statements are made.  The Fugitoid is confident that General Krang's misdeeds, all a matter of public record, are enough to seal his fate, but also says that the witness testimonies will prove Krang's guilt beyond any shadow of a doubt.  The defense attorney then makes his statement, reminding the court that Krang waged his campaign to save the lives of the Utrom people, and was successful in his endeavor.  Furthermore, all of his methods used during his campaign were within the boundaries of the war charters of the era (albeit those charters were written by the Utrom Empire, who were the prevailing dimensional superpower at the time, but the adherence to law still stands). 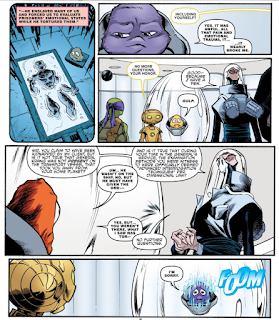 The first witness, B'een Go, is called to the stand.  He tells the court how Krang's men kidnapped him and used his empathic abilities to interrogate POWs.  The defense argues that Krang-himself was not present for the kidnapping or any of those interrogations and was unaware of the methods being used. 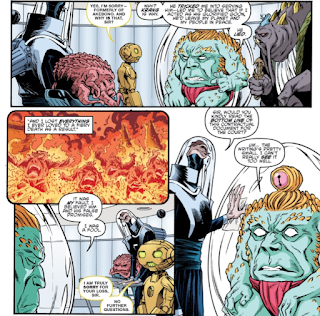 The second set of witnesses, Anemon and Eymo, are called to the stand.  Anemon tells the court how he served Krang in exchange for the safety of his people, only for Krang to destroy his entire homeworld of Akebono.  The defense then presents the contract Anemon signed when he entered into Krang's service, with a caveat that any testimony he should provide in a court of law must be rendered null and void at Krang's discretion. 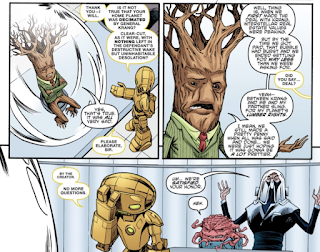 The third witness, Stump, is called to the stand.  The Fugitoid asks him about the circumstances of how Krang clearcut his entire homeworld, rendering it a barren wasteland.  Stump shares his outrage, but not regarding the fate of his planet, but how he wishes he had negotiated a better deal with Krang when he sold him the lumber rights.  The defense declines to question the witness.

With things going badly, the Fugitoid decides to call in his surprise witness: Leatherhead!  Krang is worried and the defense attorney had not prepared to counter any of Leatherhead's testimony.  But before he can speak, the Malignoid swarm attacks Smada and the trial is postponed.  The Turtles join the Neutrinos in defending the city.  Meanwhile, Hakk-R attacks Judge Gorath in his chambers...

*The Turtles collected the last of the witnesses in TMNT: Dimension X #5.

*The Triceratons' history with the Utroms was chronicled in the TMNT: Utrom Empire miniseries.

*Judge Gorath originates from the 4Kids TMNT series, first appearing in "The Big Brawl, Part 2".  Obscure as obscure can be.

Just when you think you've seen everything under the sun when it comes to the Teenage Mutant Ninja Turtles, something like THIS lands in your lap: The Turtles engaging in a courtroom drama.  See?  There's still room for new ideas in this decades-worn franchise.

The pacing of the "Trial of Krang" arc is a bit whacked, requiring you to read a separate miniseries in the middle of it and all, but the pacing of THIS issue is actually very nicely done.  It opens up with plenty of action, from Ace Duck gunning down Maligoids to an army of Triceraton commandos engaging the enemy.  It then leads into some behind-the-scenes intrigue, as King Zenter makes a questionable deal with Commander Zom in private.  And once all THAT'S over with, we get to the extended wordiness of the actual trial.

It was well-paced, I think, as it gives the less patient of us plenty of action going in, but then rewards the more curious among us with the legit trial we've been promised.  I've WANTED to see pages and pages of the alien witnesses getting cross-examined and I'm glad we weren't shortchanged on any of that (and we're only halfway through the witnesses, as a matter of fact).  I think everybody ought to get what they want out of this one, both in terms of action and the aforementioned courtroom drama.

We're also finally getting some payoff regarding the Triceratons.  They've been around in the IDW continuity since 2014, but haven't been the center of any plot lines yet.  They've just been... present.  Since we know the upcoming story arc is going to be called "Invasion of the Triceratons", I think we can put together what their participation in the IDW universe is finally going to come down to.  It was a bit of a wait, but I'm looking forward to it.

I suppose if there was anything absent from this issue, it would be any meaningful contributions from the title characters.  The Turtles are entirely passive in this installment, which isn't too major a trespass, since I love almost all these other characters and want to see them shine.  The Turtles will get back behind the wheel next issue, I'm sure.  Until then, it was kind of fun to see the Neutrinos and Ace Duck and the Fugitoid steal the show for a month.