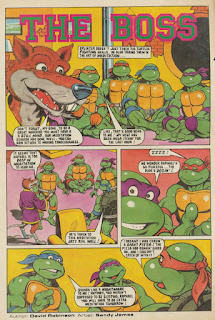 Down in the lair, Splinter instructs the Turtles on proper meditation practices.  Unfortunately, Raphael keeps falling asleep and Splinter warns him what his sensei used to do whenever he'd nod off during meditation (he'd whack him upside the head with a stick).  The Turtles then head over to Pete's Pizza Palace for dinner with April, only to find the place being worked over by mob goons operating a protection racket.  They stomp the goons, but Pete tells them that the mobsters have been running the racket on all the businesses in the area. 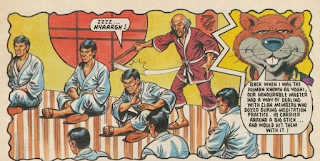 The next night, at Jack's Amusement Arcade, the Turtles stake the joint out and when the mobsters show up, they take them down.  The mobsters return to meet with the Boss, the most notorious crime kingpin in New York, and give him the bad news.  Irritated, the Boss hatches a scheme to kidnap April O'Neil and use her as bait to trap the Turtles. 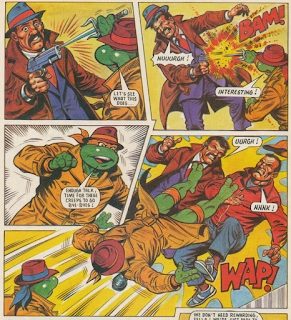 The mobsters collect April at her apartment and leave a ransom note, which the Turtles find the next day.  They follow the instructions to an abandoned warehouse where the mobsters are all waiting at the front door to ambush them.  The Turtles come in through the back door instead and get the drop on the mobsters.  As Raphael and Michelangelo deal with the goons, Leonardo and Donatello go to rescue April from the room she's being kept in.  As soon as they enter, the room fills with poisonous gas.  Using their meditation techniques to calm their thoughts and think things through, they use their bandanas as gas masks and get April out before any of them can be poisoned.  The Boss and his mobsters are then left for the cops. 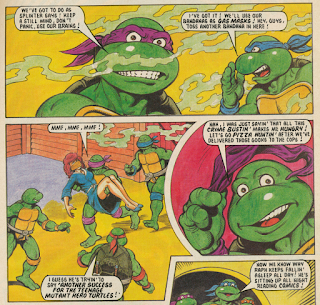 Later that night, as the Turtles sleep, they're awakened by a light coming from the living room.  Leo, Donnie and Mikey find Raph staying up all night reading comic books, which explains his dozing off during meditation.

*This story was published alongside "Toy Boy Turtles".

"The Boss" is a truly ho-hum story about mobsters kidnapping April in order to bait the Turtles into an ambush.  Not especially ambitious, no, and it certainly is disappointing seeing as how the only thing I look forward to when I open up one of these Fleetway Hero Turtle books is the assurance that I'm gonna get something really weird.  Or at least a guy in a gorilla costume.

Sandy James' art is a plus, even if the story a zero effort ordeal.  The impact he draws with all his punches and kicks leaves you with the impression that the Turtles are just murdering these goons with every blow.  Or at the very least, those mobsters are going home with serious brain damage.

It didn't come across in my summary, but the bit about Raph constantly falling asleep is a running gag throughout the issue.  He doesn't overcome it in any meaningful way to help resolve the conflict, it was just included so the story could have a droll punchline at the end.  Though it is a little funny when the Turtles are in the Party Wagon, racing to save April from certain doom, and Raph is catching Zs in the back because he couldn't give a damn.

And lastly, I would like to bring attention to this panel:

Run, mobsters!  The Turtles are going to take you from behind and then blow you!