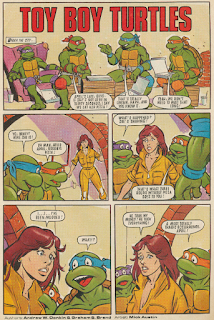 The Turtles have a dinner date in the lair with April, but she's late.  When she arrives, she's shaken, and explains that she was mugged by a clown.  The clown escaped into the back of a local toy store and the Turtles figure that's the best place to start looking. 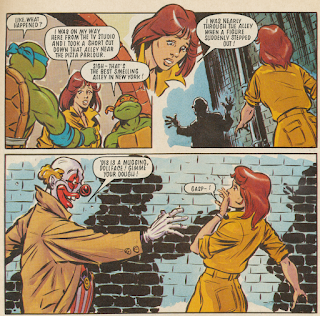 At the toy store, the Turtles pretend to be inspectors and the Toymaker cooperates, leading them into the basement.  Suddenly, all his toys come to life, actually being robots, and attack the Turtles.  The toys trap them in a giant robot spider's web and the Toymaker considers selling his catch on the illegal exotic pet market.  Raphael accidentally lets it slip that Splinter, a giant talking rat, will come to save them and that gives the Toymaker a fiendish idea. 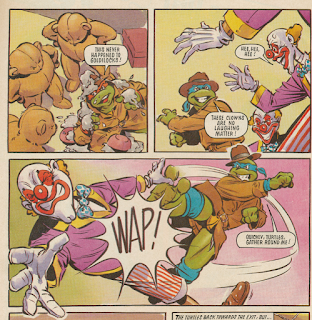 The "Turtles" return to the lair and try to get Splinter to come with them, but when they reject his offer for pizza, he realizes that they're robot duplicates.  This gives Splinter a fiendish idea of his own and he asks April to help him. 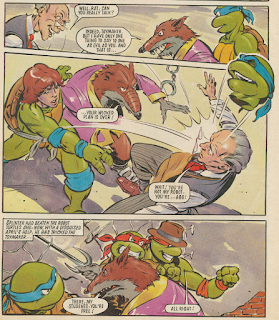 Robot Leonardo then returns with Splinter to the toy store, but much to the Toymaker's shock, robot Leo is actually April in disguise.  She and Splinter free the Turtles, who make short work of the robot toys.  However, the Toymaker escapes in a rocket ship loaded with all his stolen loot.  The Turtles give chase in the Turtle Blimp (which April and Splinter had apparently used to travel to the toy store) and Leonardo slices off one of the rocket's tail fins.  The rocket crashes by a police officer, spilling the Toymaker and all his stolen property out in front of the angry cop.

*This story was published alongside "The Boss".

Now HERE'S the Fleetway weirdness the other story in this issue lacked.  Clown muggers and killer robot toys and a blimp chasing a rocket ship... You might not be able to categorize this as a good comic, but at least you can never accuse it of being dull.

Killer toy horror movies were a pretty big thing in the late '80s and early '90s, even if the sub genre has mostly died out by now.  The context of the era helps this story, with its distinct horror movie vibe, make a little bit more sense.  Personally, I actually have an affection for killer toy horror movies, even if most of them aren't very good.  I'm talking stuff like "Dolly Dearest", "Silent Night, Deadly Night Part V" or any "Puppet Master" sequel up until the fifth one (even I have a breaking point).  Just like those movies, this comic isn't very good but I like it anyway.

You gotta love some of the bizarre conflicts in logic and plotting that this issue offers.  April returns to the lair shaking and scared beyond belief because a clown just mugged her (understandable), but then she explains how she fearlessly pursued him across the city until he escaped into a toy store.  Did something scare her again on her way to the lair?  Then there's the matter of April and Splinter, on a covert mission to trick the Toymaker... traveling to the toy store via blimp.  Doesn't get less conspicuous than that.

But hey, all the weird crap that doesn't make any sense is part of the charm for the Fred Wolf era TMNT stuff.  Also, I have to agree with little Laura Cunningham of Londonderry: 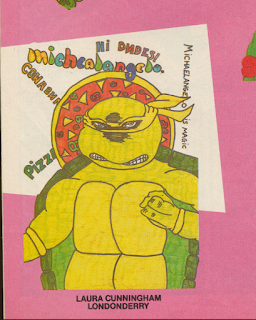