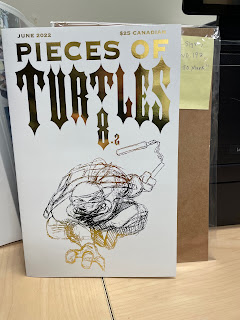 Pieces of Turtles 8 is a miniseries chronicling the creation of TMNT (Vol. 1) #8. Included are photos, sketches, anecdotes, and other behind-the-scenes content from the memory of Dave Sim.

*This issue was preceded by Pieces of Turtles 8 #1. It was followed by TMNT #8 Remastered: Ashcan Preview Edition.

*The Swordfish/Canada edition of this issue has a print run of 227 copies. The USA edition was made available to preorder on Kickstarter, but as part of the Cerebus No 4 6-7/78 campaign as an optional tier, and not as its own campaign. Print run on the USA edition was 122 copies.

Another fascinating dip into the memory pool regarding Dave Sim and his collaborations with Mirage. Of all the anecdotes, I was moved most by Sim's memory of a brief encounter with the late Julie Strain, Kevin Eastman's wife at one time.

And for collector's reference, here is the back of the Canadian/Swordfish version: 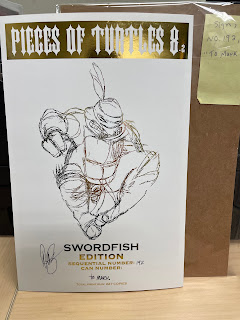 And the United States version: 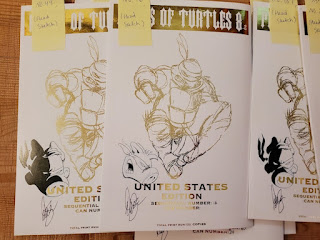 I didn't get a sketch on mine, but now I really wish I'd sprung for that tier...