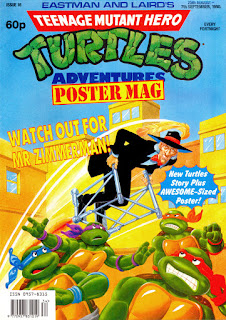 At the Manhattan Bank, an old man in a zoot suit and using a zimmer (a walker) enters and approaches the teller.  He demands a million dollars-worth of thousand dollar bills, and to prove he's serious, he fires rockets out of his zimmer.  The teller pays up and then the old man escapes into the sky on his rocket-powered zimmer. 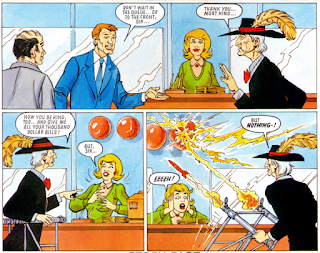 The Turtles, eating pizza at a parlor nearby, observe the commotion and hear the bank manager reading a thank you letter from the old man, who has dubbed himself "Zimmerman".  The Turtles decide to hunt Zimmerman down and begin furiously accosting every geriatric on a zimmer they can find.  This soon puts them at odds with the police, so they decide on a different strategy.

They soon encounter Zimmerman using his rockets to knock over an armored car.  They chase after him in the Turtle Van, but Zimmerman merely launches himself into the sky and escapes yet again. 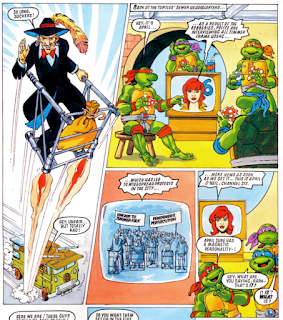 Down in the lair, the Turtles catch April's news broadcast about Zimmerman.  The police have apparently begun interrogating all zimmer-users in an attempt to catch the thief, but this had led to protests from New York's geriatric community.  As the broadcast ends, Raph makes an offhand remark that April has a "magnetic personality".  This gives Leo an idea and he calls up the Acme Electro-Tech Company.  He asks them to install some specific equipment in each of the city's five major banks (and to send the bill to April O'Neil).

The next day, the moment an alarm is tripped at one of the banks, the Turtles rush there in their van.  They catch Zimmerman in the act, but he isn't worried, as he attempts to rocket away on his zimmer again.  But not this time, as Leo activates the specially installed equipment: A giant magnet.  Zimmerman is caught and taken in by the police as the Turtles disappear.

In court, Zimmerman pleads that he's a retired space-scientist and hasn't been able to make ends meet on his meager pension.  The judge isn't moved and prepares to throw the book at him when April interrupts.  She presents the judge with a community service recommendation from Leonardo, approved by the citizens of New York. 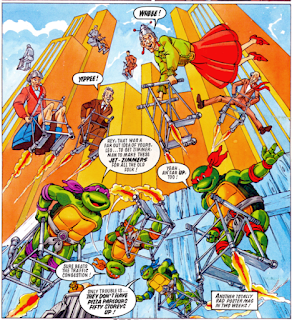 Later, it turns out that Zimmerman's community service was to make his rocket-zimmer technology available to all the elderly people of the city, who are now flying around New York.  The Turtles, too, are enjoying the rocket-zimmers, though they lament that there aren't any pizzerias fifty stories up.

*The poster in this issue was of Michelangelo.

This is the kind of old Fred Wolf era TMNT story I absolutely love: Stupid, crazy, confusing and hilarious.  I know a lot of people today look back at the old TMNT cartoon and see it as being weird and ridiculous, and it WAS, but that's also what made it so amusing.  While I dig the more modern media that tries to play the franchise with a serious tone, I think there's something to be said for surreal Ninja Turtle nonsense.

And on that note, this story is about an old man in a zoot suit who robs banks with his rocket-powered walker.  The pun in the character's name relies entirely on a British word that isn't common (or used at all) in the United States; referring to a walker as a "zimmer".  But since these comics were released in the UK with British kids in mind, I don't think it's much of a dealbreaker.  Characters also refer to a line as a "queue" and add a "u" to "parlor".  This shit's British, is all I'm sayin'.

Belardinelli's pencils are full of absurd visuals (and a bad scale/perspective issue on that last page), and that's what winds up being most of the fun.  The script has to fit it all into 7 pages, so there are these weird jumps in the narrative or leaps in logic to get it all in there.  It seemed like Leo was setting up a gag where April would get the bill for the magnets, but it never happens.  Still, the image of Michelangelo brutally shaking down the elderly and getting chased by the cops is begging for a place on a Top Ten list somewhere.

Incidentally, when I think of the Fleetway Hero Turtle comics, my mind always pictures this issue.  Admittedly, most issues weren't this interesting, so it's sort of a highlight.  Also, when I read Zimmerman's dialogue in my head, I intuitively hear Rob Paulsen's "old man voice", the same one he used for the Terror on The Tick.  It seems to fit nicely.

Posted by Mark Pellegrini at 2:56 PM

Wow, I remember these from my youth. Wish I still had them, but I get the feeling they all got thrown out at some point. Oh, well, at least I have vague memories...

I can't help thinking Belardinelli's skills were wasted on something as throwaway as this. He was a remarkable talent who never got the respect he deserved during his lifetime. Also it seems like his work on TMHT was the last comics he ever did, kind of a sad end to a long career.

Some examples of his work here:
http://hoopercomicart.blogspot.co.uk/2015/05/the-massimo-belardinelli-interview-2015.html

Interesting that he gets a story credit as I'm not sure he ever known as a writer?