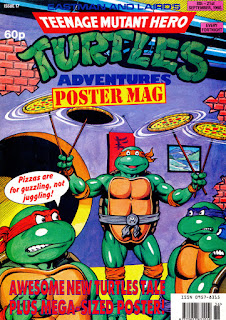 Down in the lair, the Turtles are about to dig into some pizzas when Splinter warns them that they have some surprise guests.  A mischief of rats (I looked it up!) come swarming into the lair and the Turtles offer them their pizzas out of respect for their sensei.  The rats don't seem interested in the food, which Leonardo finds suspicious.  He picks one up and discovers that the rats are mechanical.  Sensing foul play, he throws the rat a moment before it explodes! 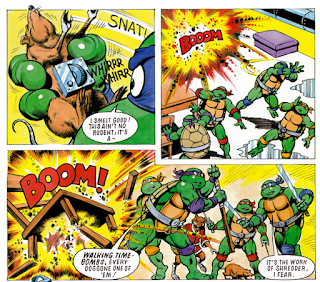 The other rats all begin to explode and the Turtles and Splinter quickly fling the bombs out of the lair before they can do too much damage.  Donatello launches one up to the surface through an open manhole where it explodes right in the face of Shredder, who had been controlling the rats with a remote.  His plan foiled, Shredder has no choice but to report back to Krang with the bad news.  Krang mocks him and says that now it's his turn to try and destroy the Turtles.

Three days later, the Turtles catch a news report from April about the new sport that's sweeping the nation: Pizza-throwing!  It's become so popular, in fact, that the city is holding a pizza-throwing contest at the Annual Summer Fête.  The Turtles are positively outraged at the news, as they staunchly believe that pizzas are to be eaten, not thrown. 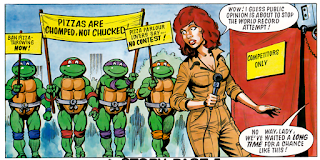 On the day of the Fête, the Turtles don big plastic heads (modeled after their own faces) and march into the celebration with picket signs protesting the maltreatment of pizzas.  April isn't surprised to see them responding in such a way, but she IS surprised to see a bunch of men in gorilla costumes come charging out of a tent, hurling pizzas.

The "pizzas" turn out to be razor-sharp discs that cut through the Turtles' signs and mascot heads.  The Turtles deduce that the men in gorilla costumes must be the Shredder and his Foot Soldiers.  The Foot disrobe and Shredder laughs that Krang's plan to lure the Turtles to the surface with threats against pizza worked.  The Foot Soldiers fling more razor-pizzas, but the Turtles destroy them in mid-air with karate chops.  Michelangelo then brains the fuck out of Shredder with a length of wood and the Foot retreat. 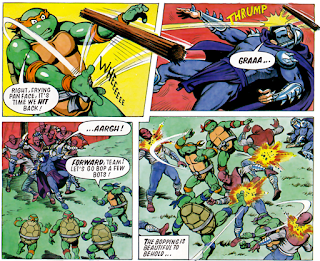 As the police arrive, the Turtles also decide to retreat.  Donnie, however, lingers behind just long enough to step on Shredder's discarded communicator, just as Krang chimes in to ask how his scheme was proceeding.

*The poster in this issue was of Donatello.

Okay, so a "fête" is apparently a British thing, usually referring to an outdoor celebration of some kind.  Here in America, where words have dignity, we refer to such a thing as a "hootnanny" or a "jamboree".  Perhaps even a "shindig" if you want to get super fancy.

So yeah, much like how last issue had a bunch of Americans in New York using British-isms, we see it again in this installment.  It'll be a common thing in these Fleetway Turtle comics and I don't want to bring it up every time it happens, but I do find it amusing.  I mean, not as amusing as some of the other comics written by Brits that take place in America that I've read (there's an issue of Marvel UK's Real Ghostbusters comic where the Ghostbusters drive from New York to Texas in 3 hours), but it gets a chuckle.

The story is bland and all sorts of whatever, but I appreciate the effort that went into the inking and coloring on this thing.  The inks are heavy and dark, but not muddy, and the colors are lush and filled with gradients.  Very painterly-looking stuff, especially for a time when American comics were still doing everything flat.  I still think I prefer the less nuanced coloring, as the Turtles tend to look like they're made of plastic thanks to all the shiny highlights, but there's no arguing that a lot of work went into these colors.

The only other anomaly worth talking about is Michelangelo's weapon of choice.  As mentioned in previous reviews, the British were skittish about nunchakus in the '80s and '90s for some reason, so the Fleetway-original stories usually excluded them (though they were left intact in the Archie reprints).  Michelangelo typically resorts to using his hands in these comics, but for some reason he spends this issue armed with... sticks.  I think they're supposed to be the same sticks he used to balance some pizzas on the first page of the story, but he carries them on him throughout the issue (the events of which span three days).

Hell, Mikey fucks Shredder's shit up by hurling a missile of wood right into his face, knocking him out cold.  And the British thought nunchakus were too violent?

Oh, and lastly, I have my doubts about how righteous the Turtles REALLY are in their anti-pizza-throwing crusade... 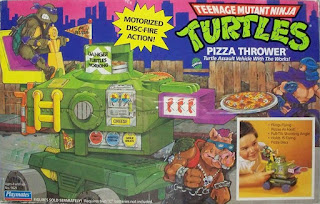 "The story is bland" Story includes Exploding Robo-Rats, Insane Pizza Throwing Sports, The Turtles protesting in giant versions of their own heads and Razor Pizza's.

You and I have very different definition's of "Bland".

Nice call on the turtle hypocrisy at the end there!

Reminds me of the first episode of the 4Kids toon where Leonardo scolds Michelangelo for wanting to keep the bag of stolen money while they are all driving away in the stolen armored truck that Donatello eventually converts into the "Battle Shell!"