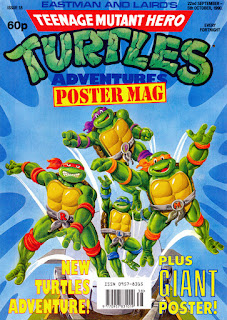 At an abandoned factory, the Turtles and Splinter are test-driving the Turtle Van when Donatello's sensors pick up a robbery near West 54th Street.  Raphael takes a detour there and finds the Foot Clan robbing a bank. 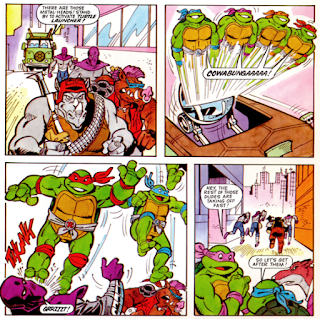 The Turtles and Splinter launch themselves from the van and pursue the crooks into an art gallery.  At the top of a staircase they find a room filled with paintings and sculptures by the real Leonardo, Donatello, Michelangelo and Raphael.  Splinter is overcome by the beauty of the Renaissance masters and opts to stay behind to experience the glory of their work. 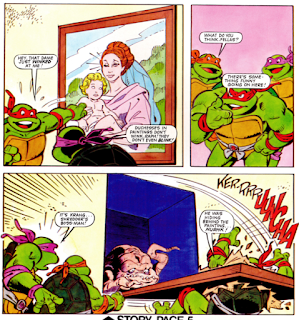 The paintings drop from the walls, revealing hiding places for Shredder, Krang, Bebop and Rocksteady.  Even worse, Splinter has been taken hostage.  Shredder boasts about his ambush and attacks.  The Turtles fight back and defeat the Foot Clan, saving Splinter, but destroy all the priceless art in the process.  Shredder and his gang escape, but Splinter is left heartbroken over the treasures that are now lost forever. 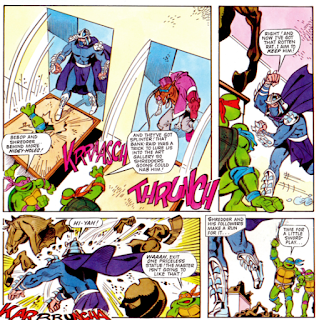 The Turtles take a closer look at the wreckage and quickly discover that all the works are actually forgeries.  Splinter realizes that Shredder never had access to all the great pieces of art and simply made phonies as part of his plot.  The sensei wishes to continue exploring the gallery in the hopes of finding true masterpieces, but the Turtles quickly flee in fear of spending their weekend stuck in a boring museum.

*The next issue to feature original content will be TMHT Adventures #21.

*The "Poster Mag" concept will be spun-off into its own miniseries, starting with TMHT Poster Mag #1.

*The poster in this issue was of Raphael.

I called the last issue's script "bland" but at least it had exploding rats and men in gorilla costumes flinging razor-pizzas at people.  This... This is just boring.  The Shredder lures the Turtles to a building and ambushes them.  The title of this story is also a fully detailed summary.

And it seems like Shredder and Krang didn't exactly think this plan through, either.  They jump out of their hidey-holes with an "Ah-HA!", but they didn't bring any reinforcements to help them attack the Turtles.  They immediately, IMMEDIATELY try to run away.  Some "ambush".  And hell, Krang doesn't even have his robot body or bubble-walker, either.  Shredder has to carry him (and drops him down the stairs).  What, did Krang just assume he wouldn't be needing legs that day?

And in the end, the conflict is resolved with that ultimate standby of "just not feeling it today".  The Turtles drop a chandelier on the bad guys.  Chandeliers should be outlawed not because they pose any real threat, but because they inspire the worst kind of laziness in writers.

The writer and artist for this installment are uncredited.  That's good news for the writer, but whoever drew this story is actually pretty good.  They go for a style that feels in line with what the Archie TMNT comics tended to look like.  Similarly, the coloring is flatter, closer mimicking the American style of comic-coloring.  While I liked the lusher, painterly look from the previous issue, this style of coloring better fits this artist's pencils.  And at the very least, the Turtles don't look like they're made of plastic, which is how they often appeared in these Fleetway comics.

Anyway, this one was pretty bad.  You don't follow-up rocket-powered walkers and pizza-throwing gorilla-men with a falling chandelier.


Posted by Mark Pellegrini at 3:03 PM