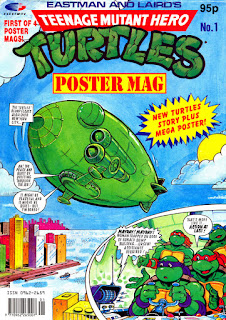 Out flying around in the Turtle Blimp, the TMNT notice a woman in distress calling for help from the roof of the Bump Building.  Turns out, it's actually Rocksteady in drag.  After Shredder lights the fuse on some dynamite, he and Rocksteady escape on handgliders.  The Turtles attempt to steer the Blimp away, but are jostled in the explosion.  The rattling opens the door on the Blimp's gondola and Michelangelo falls out. 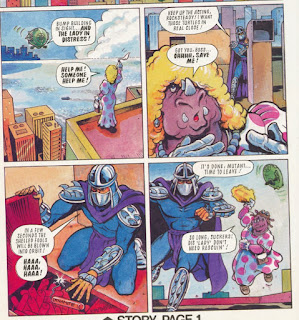 Luckily for Mikey, he lands on top of Rocksteady's glider.  Seeing an opportunity to end the Turtle, Shredder breaks out a machine gun and starts firing on both Rocksteady and Mikey.  Rocksteady tries to shake Mikey loose by throwing his purse at him, but he misses and the handbag smacks Shredder in the face, who promptly spirals out of control and crashes into Rocksteady.  Mikey, Shredder and Rocksteady then plummet into the river, where they're dragged out to sea by the powerful currents. 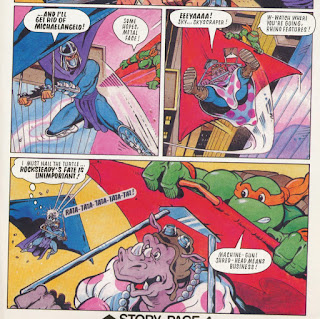 In yet another lucky coincidence, the Turtles spot them from the sky and swoop down for a pickup, rescuing both Mikey and the villains.  Shredder and Rocksteady are then put to work rebuilding the roof of the Bump Building as the angry residents keep an eye on them to make sure they finish the job.

*The idea of the "Poster Mag" was last used in TMHT Adventures #18.  This miniseries is sort of a conceptual spin-off.

*The poster in this issue was of April O'Neil.

So the Poster Mag concept in the main TMHT Adventures comic was apparently so successful, Fleetway spun it off into its own miniseries.  Plot-wise, this is a much lazier strip than what you'd find in the main series (it's just a running hang-glider battle), though the coloring on the line-work is excellent.  For something intended to be ripped out of the magazine by the staples and taped onto a wall where you'd never see the comic again, they didn't skimp on the visual side of things.

The intro to the story is extremely clumsy (incoming petty tangent).  So, the writer and artist (whoever they were) mistakenly gave the Turtle Blimp a spacious gondola rather than the appropriate glider attachment.  Mikey falling out of the gondola was part of the story, so it's not like they could have scrapped that scripting mistake in the art phase.  So what do they do?  They slap on this weird opening narrative caption, "The Turtles had fitted a temporary gondola beneath the Blimp..."  Yes, it explains the gondola being there, but it doesn't segue into the dialogue, where the Turtles are talking about responding to a distress call.  I get the feeling the caption was originally supposed to be about exactly that, the Turtles responding to a distress call, then some editor at Fleetway changed it to an explanation of the gondola.

Fact of the matter is, I don't think any of the kids reading the comic would have cared about the gondola even if it had gone unexplained.  The comic/cartoon interpretations of the toys typically boasted such vague likenesses to their plastic counterparts, we'd acclimated to it long ago.  Also, I'm going to drop this subject because I'm sick of typing the word "gondola".  Then again, I may never have the opportunity to use that word again.  It's not like I ride a funicular car to work everyday.

Lastly, I guess the real purpose of this comic was an excuse to put Rocksteady in drag.  I'm actually astonished they didn't put him in a gorilla suit.  The Fleetway writers had a baffling fascination with putting characters in gorilla costumes.

I just realized that you're supposed to read the COVER of the comic as a narrative lead-in to Page 1 of the interiors.  That explains why the first story page opens with such an awkward caption and how the Turtles know where to find the "lady" in peril.

I've never seen a comic where the cover was actually the first page of the story.  Diabolical.

Posted by Mark Pellegrini at 9:06 PM

I'll admit I was surprised they even included an editorial explanation for the "gondola" alteration. You are right that most kids had seen so many differences between toy, cartoon, and comic that we just rolled with such things as the norm back then.

Love the end where Shredder and the goons are rebuilding the Bump Tower brick by brick!

What you guys said about all those design differences, although, an actual explanation was nice, this time around.

Too bad the writer/artist team didn't have Bebop in drag, instead, as that actually happened a few times in the early Fred Wolf seasons. Probably not the continuity anyone would be asking for, but, hey, it's the thought that counts, right?

Also, it would have been a good way to properly toy-shill Rocksteady's Pogocopter or helicopter, or something. Then again, how soon did the newer toys/vehicles show up in early 90's UK stores, anyway?

"The Fleetway writers had a baffling fascination with putting characters in gorilla costumes."

Beats Bebop and Rocksteady's Easter Bunny costumes, as they could only be used once a year.

The success or failure of issue 18 may or may not have had any baring at all - Poster Mags were just 'a thing' for British comics and kids magazines for a while and Fleetway did it a bunch: LOADs of pop stars and bands had them and Sonic the Comic (their Sonic the Hedgehog comic) would have a short lived post mag series for instance without a try-out issue, of course the success of issue 18 of TMHT Adventures may well have lead to Fleetway using the Poster Mag more freely for all I know.
Speaking of Sonic the Comic I'd be very surprised if the artist for this strip wasn't Richard Elson

OHHHHH! I Remember seeing this in a shop and always wanted to know what it was. Thanks for finding it for me.

Maybe Ronald Bump can hire Rocksteady and Shredder to build a wall near the Mexican border as well...? ;-)