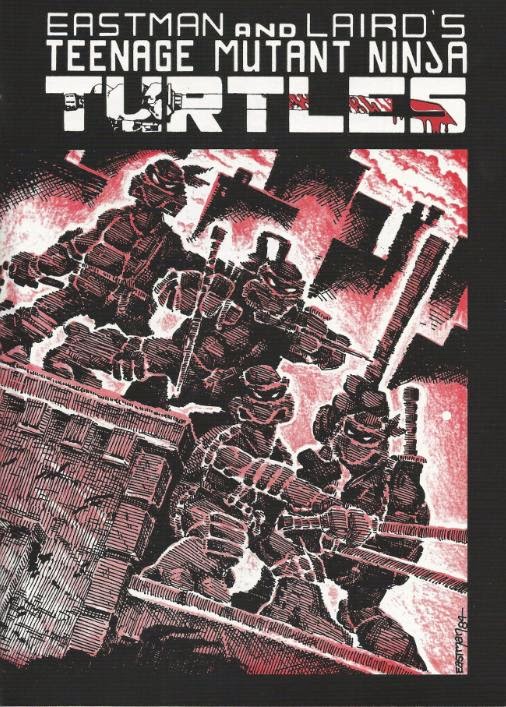 In an alley in New York City, the Teenage Mutant Ninja Turtles (Leonardo, Michelangelo, Raphael, Donatello) have taken a wrong turn and are now being faced down by the Purple Dragons, the toughest street gang in town. The Turtles make short work of them; their first major skirmish (until later issues retcon that part away, that is). As the police arrive to clean up the dead and wounded Dragons, the TMNT fade away back into the sewers. The TMNT return to their secret sewer lair and report their victory to their Sensei, a giant rat named Splinter. Splinter is pleased and at last decides they are ready to be told their origin, his origin and the mission he has trained them all their lives for. 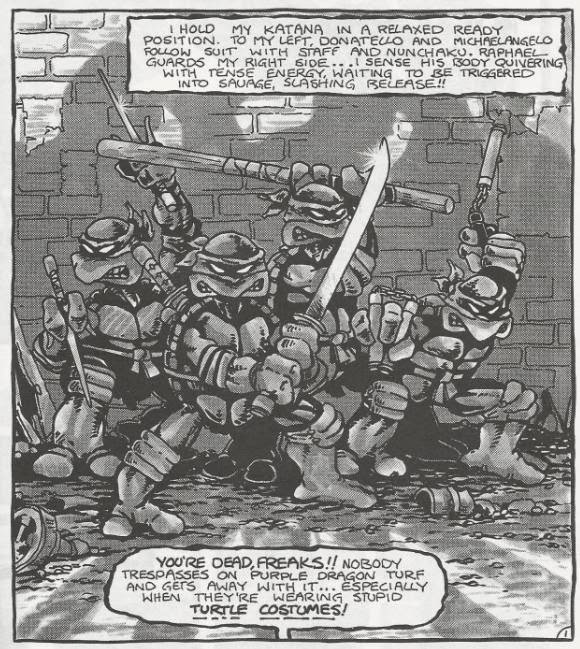 Twenty years ago, Splinter was merely a pet rat kept by a renowned ninjutsu master named Hamato Yoshi. Splinter would watch his master from his cage and mimic his moves, gradually learning the art of ninjutsu in the process (okay). Yoshi was a member of the Foot Clan, the greatest assassins in all of Japan and competed with his rival, Oroku Nagi, for the love of a beautiful woman named Tang Shen. When Shen refused Nagi’s affections, he began to beat her until Yoshi arrived and killed him in a blind rage. By killing a member of his own clan, Yoshi had only two choices: honorable suicide or self-banishment. Yoshi decided dying might suck and took Shen and Splinter with him to New York.

Meanwhile, Nagi’s seven year-old brother, Oroku Saki, swore an oath of vengeance upon Hamato Yoshi for the death of his brother. He began training to such an extent that by age 18 he had surpassed all other members of the Foot and so was chosen by his elders to head-up the New York branch of the Clan. Saki took on the identity of “The Shredder” and turned the Foot Clan into the number one organized crime syndicate in New York. With that accomplished, he decided to pursue his personal goal of vengeance. The Shredder proceeded to track Hamato Yoshi down and then killed both him and Tang Shen. 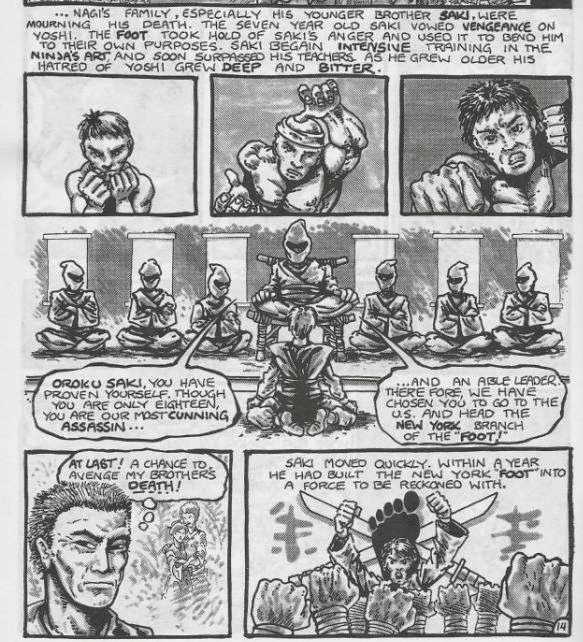 In the struggle, Splinter was freed from his cage, but could do nothing. Grief-stricken over his master’s death, he wandered the streets aimlessly. Then one day, an old blind man was crossing the street, unaware that a truck labeled "TCRI" was coming straight for him. A young man (without fear) jumped to push the blind man out of the way, just as the truck was swerving. A canister was flung from the truck, hit the young man in the eyes, then bounced down the street, smashing a bowl of baby turtles a child had just bought from a pet store, then fell down an open sewer access along with the turtles (damn!).

Splinter followed the action down into the sewers, where he found the canister had shattered and spilled a glowing green ooze all over the turtles. Splinter cleaned them off then scooped them up, put them in a coffee can and took them back to his burrow. He claims he “didn’t know quite why he did that”, but I’m pretty sure he was going to eat them. The next morning, Splinter found the ooze had made him larger and more intelligent. The Turtles were affected the same way and within a year were walking upright and speaking. Splinter then decided to teach them the art of ninjutsu he had learned from Master Yoshi and named them after the artists he’d read about in a Renaissance Art book. Eventually, they surpassed his lessons and became true ninja.

With storytime over and done with, Splinter charges his pupils with the task he’d like them to complete before he dies of old age: Kill the Shredder. 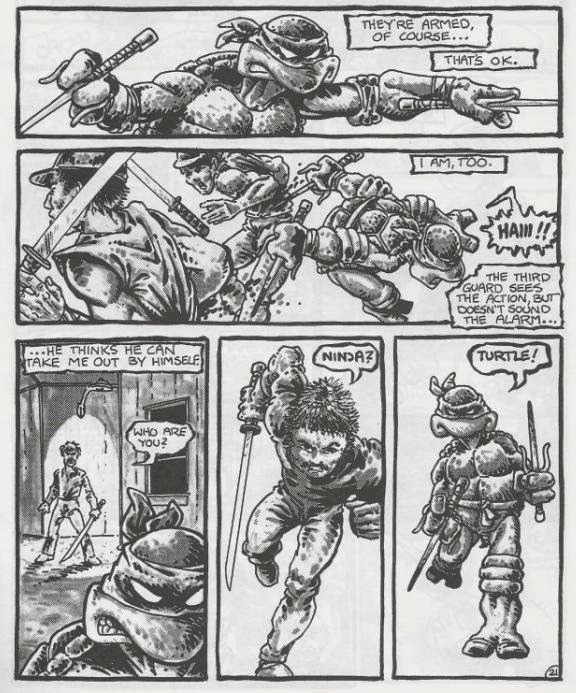 Later, Raphael prowls the rooftops, given the task of delivering their challenge to the Shredder. Raph infiltrates the Foot headquarters, killing several baseball cap-wearing Foot Ninja in the process. Inside the building, Oroku Saki is trying to convince a client, Mr. McAdam, into purchasing his “protection”. Just then, Raph’s sai comes through the window. Shredder dodges the sai with ease, then reads the note attached to it; a challenge issued by Splinter. McAdam and associates believe that if Oroku Saki cannot keep his own complex secure, then he has no business offering protection to anyone else, and storm out (I didn't know mob protection worked that way). Shredder is outraged and bitterly accepts the challenge. 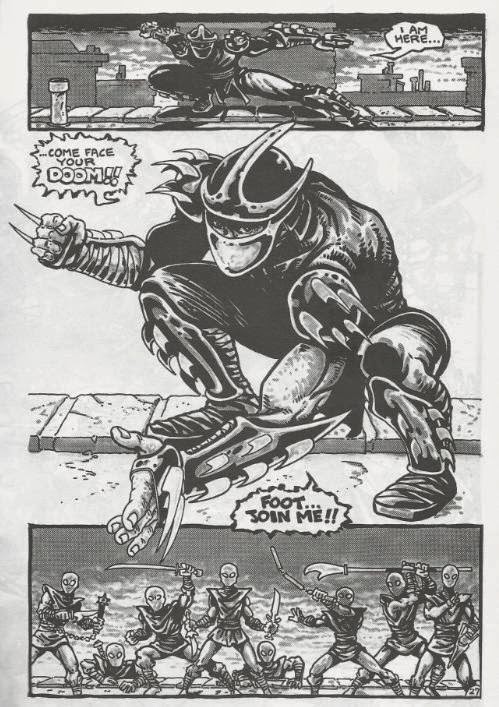 The following night, the Turtles arrive at the roof of an abandoned building for their showdown with the Shredder. The Shredder arrives, along with a legion of Foot Soldiers. The Foot attack and suddenly everything erupts in a two-page spread! The Turtles come out on top, though they have been injured in battle; all a part of Shredder’s plan. Shredder proceeds to take out Raph, Don and Mike, but is sliced across the torso by Leo. Realizing they can’t best him in close quarters combat, the Turtles decide to wear him down with a flurry of shuriken. The plan works and with the Shredder weakened, Don moves in and bashes his helmet off with his staff. Leo then impales Shredder with his katana. Shredder tells Leo to finish it, but being a turtle of honor, Leo offers Shredder the chance to die properly by committing seppuku (honorable suicide). But the Shredder’s kind of a dick, so he refuses, then pulls out a thermite grenade which will take all the Turtles out along with himself. Don then hurls his staff, knocking the Shredder off the roof, where he promptly explodes and dies. 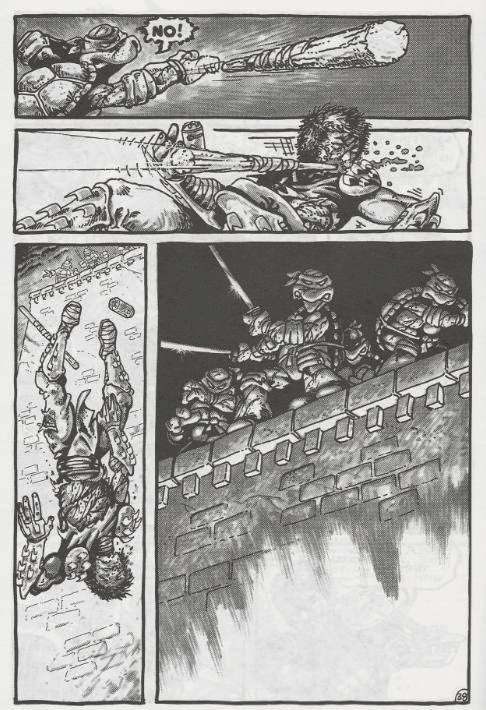 Mike then bitches that he’s tired, so the Turtles decide to go home; their mission accomplished. Down in the alley, they find pieces of the Shredder and his armor all over the place, observing that the Shredder has been shredded. They then throw the loose armor aside and fade away into the night.

*At least one of the Dragons the Turtles fight in this issue will reappear in Tales of the TMNT (Vol. 2) #57.

*The identity of the guy driving the TCRI truck will be revealed in Tales of the TMNT (Vol. 2) #23.

*The fate of the kid who bought the turtles from the pet shop will be revealed in Turtle Soup (Vol. 2) #4, in the story “Fifteen Years Later”.

*The Shredder will return in Leonardo (microseries) #1.

*This comic has been reprinted numerous times.  Notable printings include:

**The first (duh), printed May, 1984.
**The second, printed June, 1984, and the third, printed February, 1985, have no changes from the first printing other than a note in the top left corner of the inside cover mentioning the printing.
**The fourth, which included a new cover and five pages of bonus sketches, printed September, 1985.
**The fifth, which included a new cover and bonus story “Not One Word!”, printed November, 1988.
**The sixth, released in both hardcover and softcover editions, containing an intro from Harlan Ellison and bonus sketch pages, 1992.
**The PBBZ reprint, available only at the PBBZ Comic Con Small Press Fest, contained a new cover by Peter Laird and completely re-lettered and “digitally touched-up” interior pages, printed May, 2005.
**The Free Comic Book Day reprint, available as a give-away only at comic book stores, printed May, 2009.
**The full-color reprint, containing new colors by Steve Lavigne, printed November 2009.
**TMNT Color Classics #1 from IDW, containing new colors by Scorpion Studios, printed May, 2012.

Originally, I intended only to review issues of the Archie Comics TMNT Adventures series on this site, but have since branched off into other TMNT universes. So, now that I’ve started reviewing the Mirage TMNT comics, not having this one on the site would just be blasphemy.

This very first TMNT issue is, of course, the genesis of the franchise. I mean, all the movies and cartoons and other comics have done their own variation of this story; it’s as vital to the characters as "Superman and Krypton" or "Batman and depressing childhood trauma". Though one thing you have to keep in mind is that it was originally conceived as a one-shot parody of Frank Miller’s “Daredevil” (that was supposed to be Matt Murdok getting beaned in the eyes with the ooze canister) with some “X-Men” mixed in for good measure. So with that in mind, it’s kind of a weird story.

Firstly, the “Daredevil” bit is pretty in-your-face if you’re even remotely acquainted with the character and his origin. It can be a little distracting. I mean, try to imagine if the Turtles’ origin went like this: “The Turtles stowed away on a spaceship carrying an infant, which crash-landed in a small town in Kansas, the yellow rays of the sun turning them into humanoid mutants”. Honestly, it’s more or less the same thing, just with Daredevil. 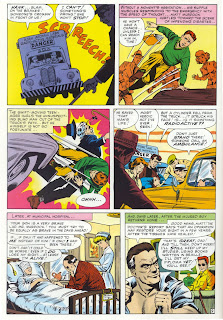 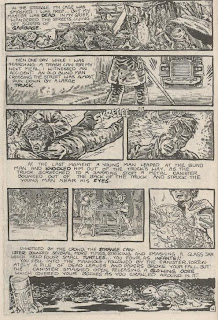 But really, that’s my only complaint. This first TMNT story is a classic, harkening back to a time when small press, independent comic books really offered something new, gritty and different. Eastman and Laird’s art is iconic, though the Turtles do look a bit fugly (they’ll be made easier on the eyes as the issues go along). The pair had a great sense of dynamic action, offering some glorious fight scenes and a moody use of duo-tones and inking, giving the book such a grimy and dark atmosphere. Unless you’re reading the PBBZ reprint with Laird’s “digital touch-ups”. Then you don’t get to see any of that. Sorry.

I’m not a big fan of their depiction of facial expressions on humans, with Yoshi’s “Good Lord!” reaction on page 15 looking fairly comical. But when the book revolves around four turtles, a rat and a guy with a metal helmet and faceplate, you don’t really see a whole lot of human facial expressions. One thing Eastman and Laird don’t get enough credit on, artwise, at least in my opinion, are their backgrounds and environments. The cityscapes, trash-strewn alleys and abandoned buildings all look fantastic and they’ve always had a knack for illustrating the uglier, grittier underbelly of the Big Apple.

Being initially intended as a one-shot gag comic, Eastman and Laird proceed to kill off the Shredder. You know, the TMNT’s number one arch-nemesis? Funny thing about that; he’s a bigger enemy to the Turtles in every TMNT continuity BUT the Mirage series. Here, the original Shredder has only appeared in one issue, his clone in four and his other clone (the shark-octopus one) in three. The Shredder’s legacy has always been a bigger menace to the TMNT of the Mirage universe than the character-himself, and to the series’ credit, they really make it work.

Also, another casualty of the one-shot gag comic thing: none of the Turtles really have any individual personality in this issue. And outside of Raph and his brief monologue about liking the outdoors and hating the sewers, none is even attempted. Certainly forgivable; this whole thing was just meant to be a joke, after all. Their individual identities will pop up pretty quickly after this issue, so no worries.

All in all, it’s a very fun, classic, iconic issue. The art may be a little rough and the one-off gag nature might be a bit distracting, but there’s very little to complain about here. This is the genesis of the entire global Ninja Turtles franchise. Right here. There’s no way I can’t give this issue an ‘A’.