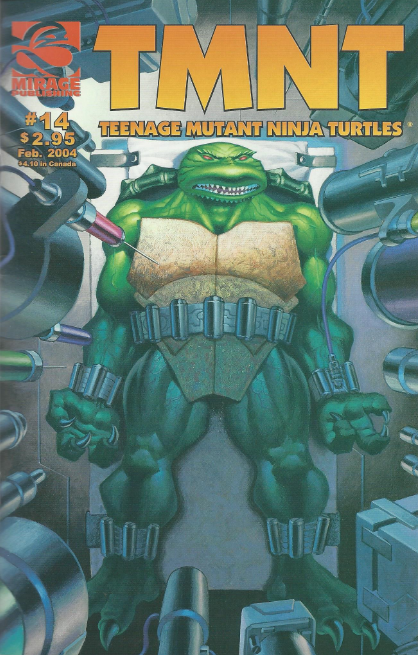 Skinner State Park, atop Mount Holyoke, South Hadley, Massachusetts (overlooking the University of Massachusetts).  April wanders into the forest and opens a pocket watch with a strange button on it reading “For Emergency Use Only”.  She presses the button and waits for several hours.  She returns to her car only to find Renet waiting in the passenger seat.  April asks why she didn’t respond to the summoner immediately and Renet explains that she knew in advance why April pressed it.  However, she was so distressed over how to handle the situation that she waited three years (in her time) before coming.  Renet says she can help April find the answers she seeks, and they can leave immediately, but that the truth might crush her.  April says she’s ready and they vanish. 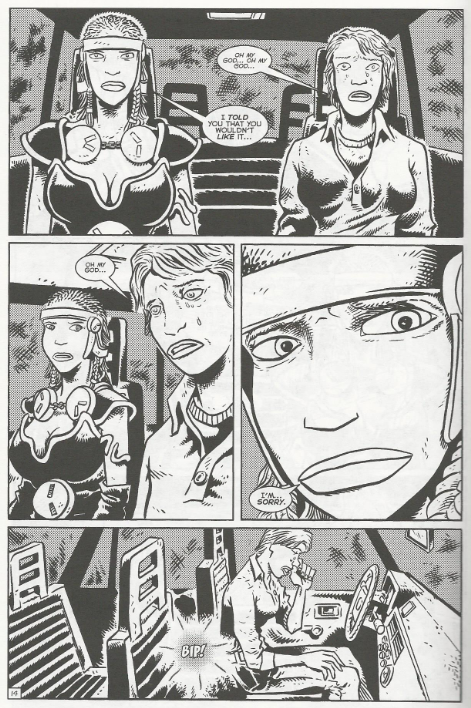 A moment later, they reappear in their seats.  April’s hair is longer and her clothes are different.  April breaks down weeping and Renet tells her she’s sorry before disappearing.

On the tepui, Donatello uses a mediscanner to inspect a limb blasted off of the wood-creature when they attacked it.  He says that although the creature appears to be made of wood, there is pinkish muscle tissue woven in.  The DNA scan says that the flesh is that of an Utrom.

At Kurtzburg, a pair of human doctors, Glurin and the Fugitoid look over a sedated Raphael from a safe distance.  They come to the conclusion that he received some sort of viral infection when he was attacked which mixed with the mutagen in his system, thus causing him to mutate out of control.  The Fugitoid says that his contacts at the NYPD forensics department have confirmed that his attack mirrors the recent “vampire” attacks that have been happening all over the city.  Suddenly, Raphael awakens and goes on a rampage, the virus having counteracted the sedatives in his system.  The Fugitoid ushers the doctors out as Raphael begins to smash through the armored door. 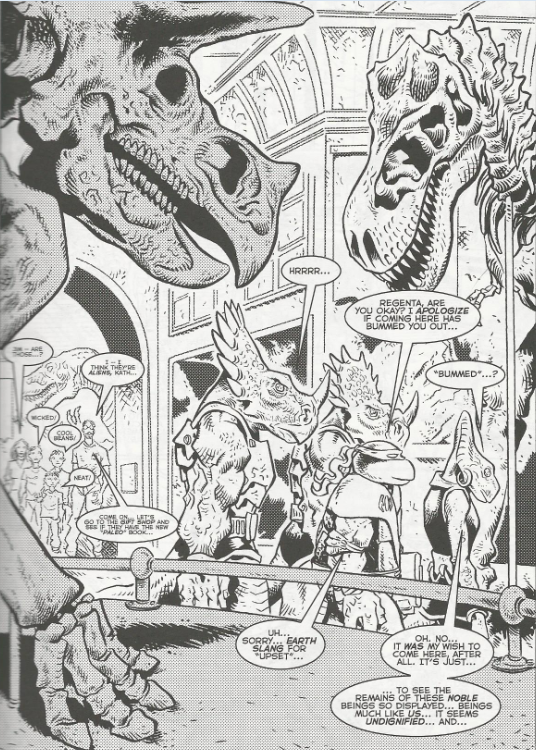 At the Museum of Natural History, the Regenta is a little disturbed at the sight of all the dinosaur bones being put on display for human entertainment.  Michelangelo tries to tell her that it’s a purely scientific and historical exercise, but what upsets the Regenta more is the knowledge that a saurian race LOST the evolutionary cycle and that mammals won.  Changing the subject, Mikey asks where she’d like to go next.  She says she has a craving for a strange alien dish that she describes in detail.  Mikey figures he knows just the place to find an Earth analog.

At Foot Clan HQ, Karai and Cha Ocho show Leonardo footage of the most recent attack from the strange warrior who has been assassinating Foot Soldiers.  At the end of the footage, the warrior is ambushed and killed by a machine gun.  Leo finds such a sneak attack dishonorable, but Karai explains that they were desperate to stop him.  Evidently, there are several of these warriors out there and they have been systematically eliminating Foot Soldiers for several months.  The Japanese branch is completely wiped out, along with branches elsewhere in the world.  All that remain are the few in the New York branch. 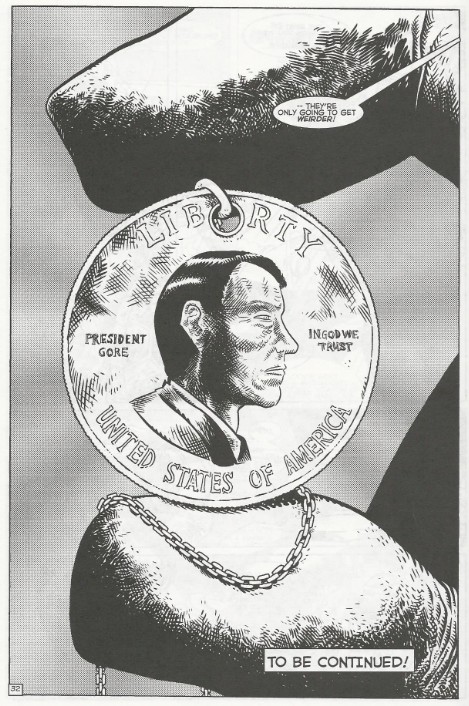 Karai takes Leo to the morgue and shows him the corpse.  Much to Leo’s surprise, it is human but completely genderless, lacking all reproductive organs.  She then shows him the warrior’s effects: Triangular tiles which it ritualistically leaves at the site of each killing, a sword similar to an Aztec maquahuitl albeit made through a metallurgy process unknown to science, and one other thing.  Leo is shocked when he sees the warrior’s necklace and Karai assures him that tests have proven it to the work of the United States Mint.  It’s a coin emblazoned with the image of President Al Gore.

*When and why Renet gave the summoner to April is another untold Tale of the TMNT.

*On Page 21, a character named Jim wants to go pick up the newest issue of “Paleo”.  Paleo was a comic created by Jim Lawson.

*This issue was originally published with a 3-page preview of Tales of the TMNT (Vol. 2) #2.

I’m thinking the review sections of these TMNT Volume 4 articles are going to be pretty slim from now on.  Like I said last time, not a lot really happens in most of these issues and there just isn’t much to discuss in single sittings.  The progress is far too incremental.

I guess I’ll try to come up with something.

April’s and Renet’s encounter was very well done.  Reading this comic when it first came out, it certainly succeeded in getting me curious.  Unfortunately, it would be 8 issues and a year and a half before we learned what happened when they vanished.  The absurdly long cock-tease pretty much killed my interest in that mystery (and the answer we got didn’t help).

That being said, the setup did its job well initially and as a reader you're left wondering just what the hell happened when they disappeared.  I like the idea that Renet would give the Turtles and April a means of contacting her, making their relationship a more two-way street.  In the past, it’s always been Renet who comes barging into their lives unannounced.  But as you can see in this issue, Renet’s not a kid anymore, but a full-grown adult, so it seems natural that she’d finally become more considerate toward her friends.

As yet another “untold Tale of the TMNT”, we never find out when or why Renet gave April the summoner.  We know that it was “years ago” (so she didn’t get it from her at Splinter’s funeral), but any specifics beyond that are left unknown.  One of these days, I’m going to have to list all the “untold Tales of the TMNT” we got teased with but never received any closure on.

After being absent from the previous issue, Leo’s story takes an interesting turn.  Leo’s and Mikey’s arcs were probably the two most interesting ones that ran through Volume 4 (Raph’s and Don’s go absolutely nowhere, April’s gets really stupid) and a hundred years later I still find myself a little anxious to know how they turn out.  Going back and rereading these issues just serves to remind me how genuinely excited I was to see these stories unfold, only to have that enthusiasm slowly wither away and die from cancer over the course of a decade.

I don’t recall if we ever find out the specifics of the warrior’s alternate universe/timeline.  Apparently, he’s from a dimension where Al Gore not only defeated George W. Bush in the 2000 election, but proceeded to be such a remarkable and beloved President that his face was immortalized on a coin.  And apparently the people of the warrior’s world cherish Al Gore so much, they’d wear the coin around their necks as a beloved keepsake.

Yeah, the guys at Mirage were never too shy about their politics.  Peter Laird and Steve Murphy were probably the most upfront about them in the pages of the books, to say nothing about the rants they’d publish in the letters pages.  Check out the missive Laird pens in this one, if you have the time or inclination to do so.  Apparently, while he was riding his Segway through the University of Massachusetts (his alma mater), some guy in flipflops accosted him and accused him of being a “George Bush Republican”.  This wounded Laird so deeply, he wrote a 12-paragraph rebuttal in the pages of his comic.

For a guy who thinks Al Gore is the greatest president America never had, yeah, I can see how being called a “George Bush Republican” could crush him so thoroughly.

Anyway, in addition to politics, there are bystander characters at the beginning who talk about UMASS (again, laird’s alma mater) and Paleo, a book by Jim Lawson that Laird published.  Add all that to the previous issues where characters stop to talk about how great Apple products are and you sure do learn a LOT about Peter Laird in these comics, don’t you?

TMNT Volume 4 tells you an awful lot about Peter Laird.