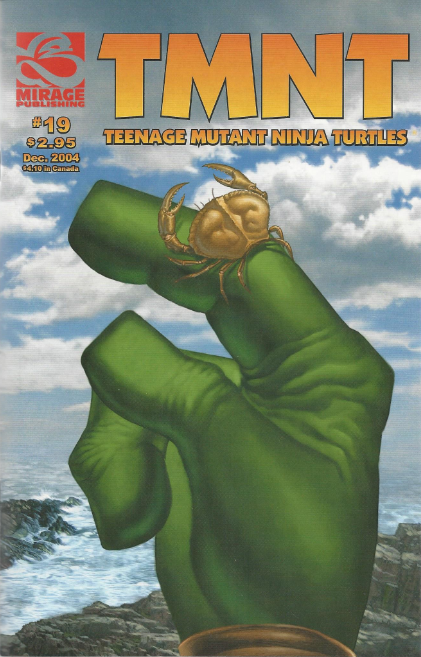 On the Moon-Island, a smiling, humming alien arrives for a Manhattan vacation.  He’s cleared by the Utroms and takes a casual walk through the city, eventually stopping for lunch at a diner.  A waitress brings him some coffee… and a note with an address on it.  The alien destroys the note and heads to the address in a shady part of town.  A thug-looking human lets him in through a back door, telling him he’s late.  The alien assures him that he’s brought “the stuff”. 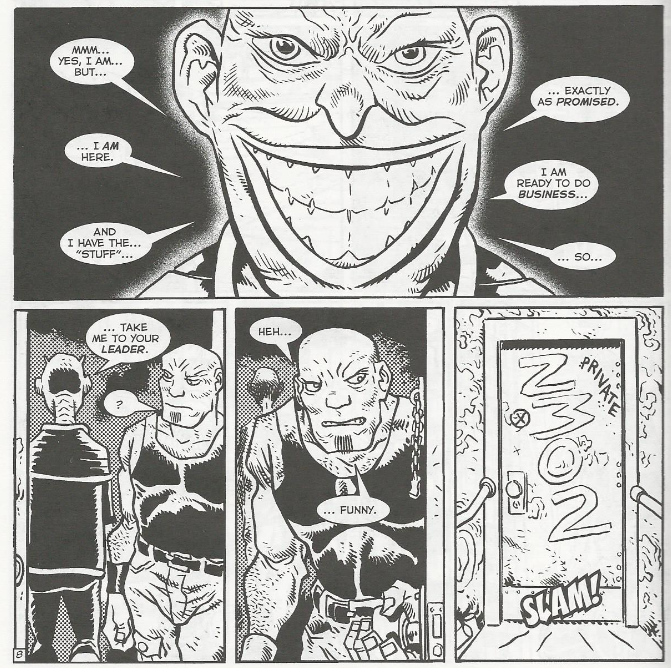 On a beach in Maine, Michelangelo wakes up after a “busy night” and rousts Seri (the Regenta’s real name).  He sees her clutching a mound in the sand, but when he tries to see what it is, Seri gets furious and drives him away.  She says that it’s a maternal instinct, as she’s protecting their eggs.  Mikey is a bit shocked. 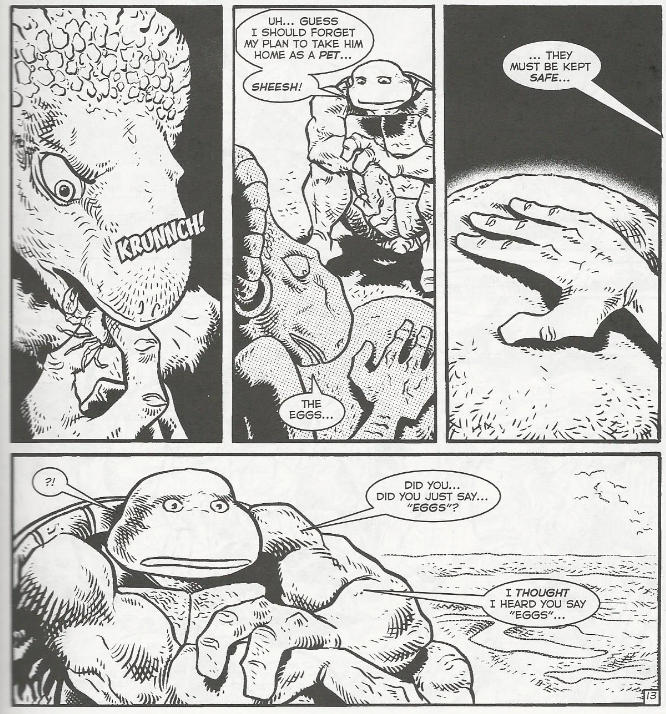 In the habitat in the Venezuelan tepui, Glyminal, the Utrom in the wood-creature body, agrees to explain himself to Donatello, the other Utroms and the human explorers.

Apparently, while taking the mutagenic waste to dump in the tepui decades ago, their ship crashed.  Not wanting to risk ruining the Utrom operations in New York (trying to build a transmat home), Glyminal and his crew elected to live in the jungle.  The waste spill had strange effects on the local flora and fauna, mutating some plants into the living wood-creatures and some reptiles into the raptor monsters.  The raptors acted as beasts of burden until their intelligence allowed them to rebel, swearing bloody vengeance on the Utroms.  The wood-creatures were then worked into organic exosuits.  Among their other experiments, they invented a Quantum Inversion Redimensioning device; a shrink ray, which they used to experiment on local creatures with the glass habitat. 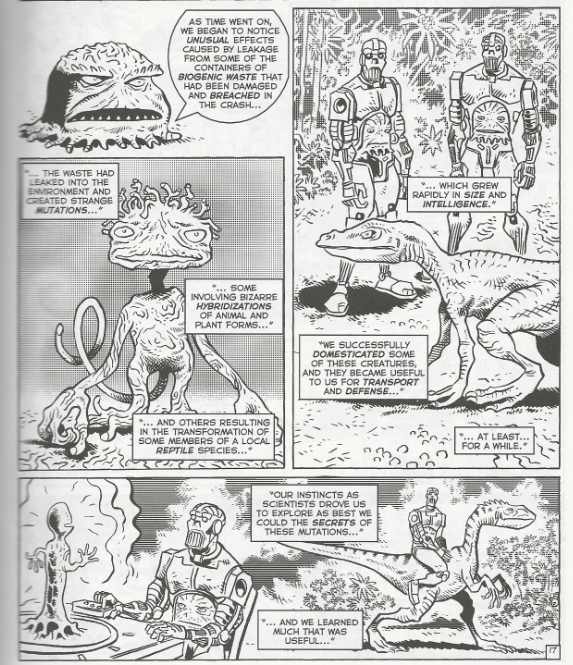 The explorers take exception to being treated like lab rats, but Glyminal assures them they meant no harm.  He then hears a loud noise and leaves to check on it, with Donatello tagging along. 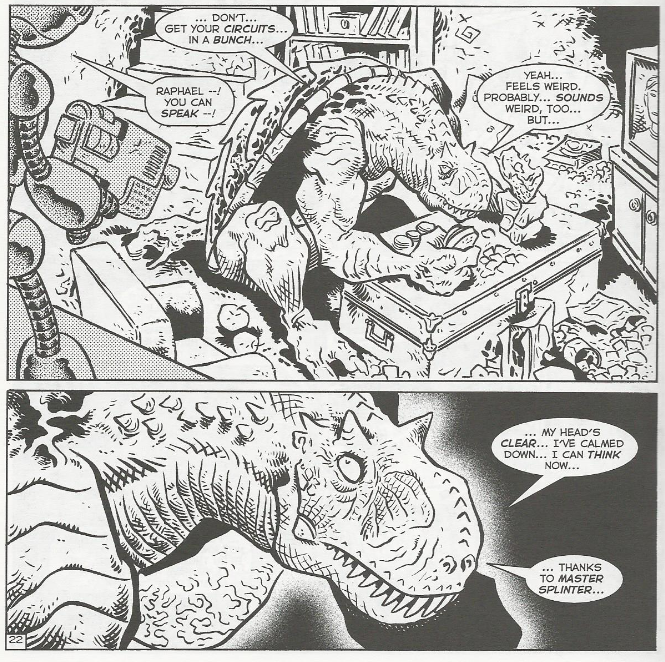 Down in the sewers, the Fugitoid approaches the busted up entrance to the lair, prepared to take the mutated Raphael down with a stun laser.  He finds Raph inside, apparently restored to his faculties.  Raph apologizes for going berserk and the Fugitoid forgives him, getting him up to speed on everything he missed. 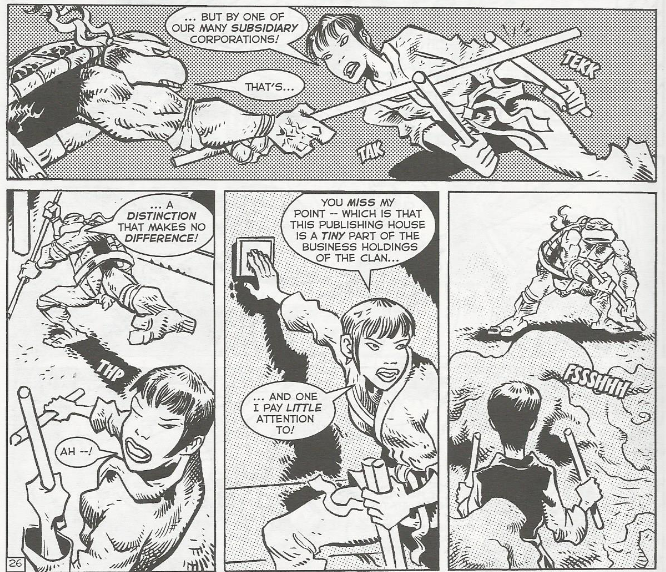 At Foot HQ, Leo and Karai are sparring in Karai’s holographic training dojo.  Leo tries to grill her for facts on the spell book the Foot insists on mass market publishing, but the increasingly flustered Karai insists that it’s nothing more than nonsense to appeal to crystal-gazing spiritualists.  Leo suggests that the book may in fact be one of “The Nine” and that she’s dabbling in forces beyond her control.  Fed up, Karai tells him to drop the subject.  Leo does so, but feels like Karai is somehow being controlled by an outside, supernatural force. 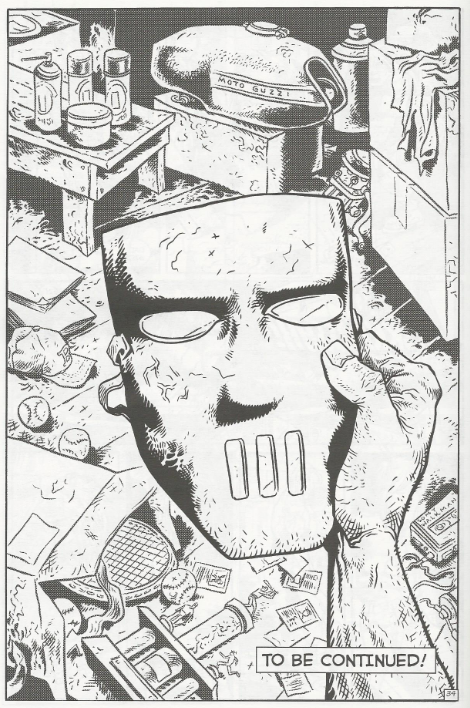 Up in Northampton, Casey pays Shadow a visit and helps her tune up her motorcycle.  He gets a call from April, who tells him that she can’t come home.  Something happened that she doesn’t understand and until she can figure it out, he can’t see her.  She hangs up and Casey goes berserk, tearing apart the garage.  When he finally stops, he looks down and sees his old hockey mask staring back at him and picks it up.

*This issue was originally published with a bonus pin-up by Peter Laird and Eric Talbot.

So, I’ll cop to not remembering this opening subplot with the smiling alien guy at all.  Not even a little bit.  I guess that makes this part “new to me” since… wow, zero memory of the thing.  I wonder if it goes anywhere…

In Mikey’s case, I DO remember this part of the story pretty well.  We’re still waiting on answers as to whether those are really his eggs or not.  You know, eleven years later.  We get the Regenta’s real name in this issue (Seri), and in the last issue Laird mentioned in the letters page that Seri was not a Styracodon.  That’s interesting.  Is there a reason for that?  I can’t remember.  But so much of Volume 4 blurs together in my cranium, clearly there’s a lot about it I can’t remember.  I guess that’s why I’m rereading it.

Don’s segment is all exposition on the part of Glyminal as he feeds us the conclusions we already came to four issues ago.  This really is the most doddering of all the arcs.  I mean, there’s some interesting world-building going on (the Venezuelan Utroms being at war with the raptor monsters), but the spoon-feeding has been atrocious and the payoff will be minimal (now there’s something I can remember!).

Raph can think and talk again.  So there you go.  His exchange with the Fugitoid is mostly a recap of information we as the reader already know.  Yes, its news to the characters, but it’s a rerun for the rest of us.

The bit between Karai and Leo was pretty solid.  I’d found Karai’s stuttering and unconvincing lying to be out of character for the past few issues, so it was nice to see that addressed with Leo’s conclusion that her mind is being controlled.  Leo’s arc was really the most interesting of the stories in Volume 4 (with Mikey’s coming in second) and even now I find myself feeling intrigued as to the endgame.  We still don’t know what the deal is eleven years later, but the buildup in this arc has been pretty well paced on account of it feeling like there’s a bigger picture at play.

Volume 4 is almost like a “Choose Your Own Adventure” book.  Let’s say all of the character arcs were isolated and you were told to pick one and only one and follow it to its ending.  The Raph and Don arcs ultimately amounted to fucking NOTHING, so that’s a couple of those multi-path situations where you’d lose.  But the Leo and Mike arcs feel like the real “meat” of Volume 4 and those are the ones worth following, even if we still haven’t gotten any sort of satisfaction on them.

…So I guess every path is a loser.  Nerts.

Also, Casey!  Now, this was a big moment in the comics when it happened, though several issues of Tales of the TMNT Volume 2 have chipped away at its narrative value.

You see, Casey gave up being a vigilante after the “Shades of Grey” arc in Volume 1.  That was a big decision and it informed the rest of his life from then on.  Even when he had to put on a mask to help his family by beating up some government spooks in Volume 2, he deliberately didn’t put on a hockey mask.  He put on a weird kind of half-mask thing.  It was symbolic; the hockey mask is a relic of a past life he’s worked to put behind him.

So Casey here is at an ultimate low ever since he “reformed”, what with April seemingly abandoning him, so his choice to pick up that particular mask was a huge deal.  He feels he’s lost the woman who helped him turn his life around and so he might as well revert back to his less developed self.

At the time this issue came out, there was only Volume 1, Volume 2 and Volume 4 (the Image Volume 3 series, which featured Casey wearing his mask and acting as a vigilante, was stricken from the record).  So from that perspective, Casey really HADN’T been a hockey mask-sporting vigilante in forever.

But then Tales of the TMNT Volume 2 came along.  Several stories were published in that series which take place between “Shades of Grey” and Volume 4… and in those stories, Casey is wearing his hockey mask and beating up crooks with sporting equipment.  You can blame it on bad editing, if you want; nobody telling the writers, “Hey, Casey shouldn’t be a vigilante at the time you’ve set your story, so you should change that”.  Laird has confessed in the past that for a large portion of Tales Volume 2, he wasn’t  approving the scripts or even reading the stories after they were published; I imagine if he had, he might have endeavored to preserve the integrity of his own storytelling milestones.

With that in mind, Casey’s big comeback as the cliffhanger in this issue holds more impact if you read the issues by publication date rather than in narrative order.  Because if you go with the latter, then Casey holding up that mask and staring at it with desperation will only serve to elicit a “big deal” from you, seeing as how he was just wearing the damn thing a few years ago to fight the Decider or Hun or the Shark Shredder.

All that considered, though, the impact it was INTENDED to convey was very good and it remains one of those little moments in Volume 4 I recall distinctly.