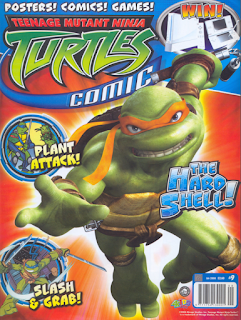 Darius Dun pays Cody and Splinter a visit at their penthouse, bringing a gift along with him.  Feeling awful about how he and the Turtles haven't gotten along, Darius offers Splinter an envelope of special seeds for his garden, hoping that the blooming flowers might symbolically represent a blooming friendship.  Splinter graciously accepts and plants the seeds.  As Darius leaves, he compliments his own scheme, knowing that the mutant seeds will destroy the Turtles and Cody, leaving O'Neil Tech to be his. 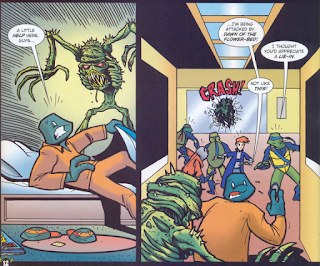 The next morning, the Turtles awaken to find the penthouse overrun with killer vines.  Even worse, the vines are transforming into man-eating plant-monsters.  The Turtles try to chop up the monsters, but their dismembered parts only grow into more monsters, multiplying their enemies.  Leonardo suggests they use Splinter's weed killer on the plants and Donatello comes up with the idea of pumping it through the building's sprinkler system.  Unfortunately, the pipe access lines are on the lower floors and the only way down is to scale the side of the building.

Michelangelo is elected for the mission and skateboards down the side of the skyscraper as Turtle X follows him, carrying the barrels of weed killer.  Mikey makes it to the pipe access and pours in all the weed killer.  The sprinklers activate and the plant-monsters quickly dissolve. 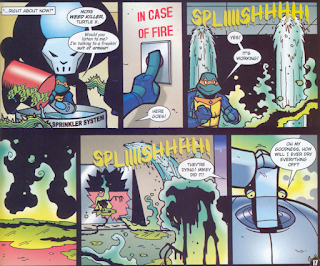 Later, as Serling cleans the mess up, Cody contacts Darius and asks what was up with those seeds.  Darius hastily claims that they were given to him by a representative of an off-world trading company and surmises that the rep wasn't aware that the alien seeds would react violently in Earth's atmosphere.  Cody buys the excuse and Darius clenches his fist, vowing to get the little brat next time.  As for Splinter, the weed killer destroyed not only the monsters, but his whole garden, too.  The Turtles grab some tools and offer to use their "green fingers" to help him plant a new garden.

*This issue also reprinted the next 8 pages of TMNT Movie Prequel #5: Leonardo with new colors by Hi Fi Design.

After a string of absolutely awful issues, Titan's TMNT Comic finally manages to hit... well, I wouldn't call it a home run, but they at least got a man to first base.  "Power Plant" is not a very imaginative story, but it IS a competent and coherent one, which is more than some of the previous comics can say.  There aren't any plot holes, coloring or lettering errors to speak of, and while the conflict may be boring and predictably resolved, I'm just glad I was able to finish it without once saying, "What the fuck am I reading?"

Pereira Studios still isn't very good when it comes to art.  I mean, check out at THIS thing and tell me if that looks like a Ninja Turtle to you: 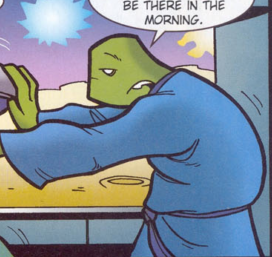 His mouth is in his neck.

The plant-monsters look pretty good, however, so maybe Pereira had more of a knack for original creatures than keeping to an established design aesthetic.

Lastly, this issue of TMNT Comic included another costume party gag.  Have fun guessing what movie they're dressed up as this time. 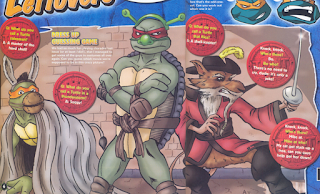