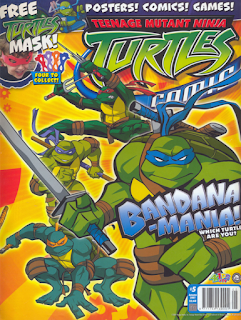 "Trials of a Ninja!"

At O'Neil Tech, Cody finishes up his latest ninja training session with Splinter.  Splinter is very impressed with Cody's progress and challenges him to a field test to determine his ability.  Splinter gives Cody an egg and a map plotting a route through a hazardous part of the city.  If he can make it home without breaking the egg, he will pass the test. 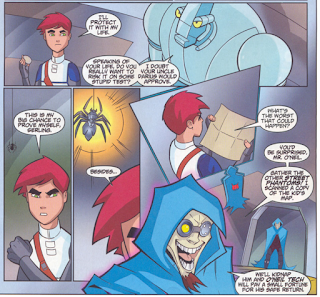 Little do they know, Jammerhead and the Street Phantoms are listening in through a spying device disguised as a spider.  Jammerhead figures that they'll have no better opportunity to kidnap Cody and ransom him off for a fortune and dispatches the other Street Phantoms to collect him.

Cody is dropped off at a construction site to begin his gauntlet home.  Leonardo and the other Turtles aren't sure Cody is ready to be by himself in the big city and Splinter agrees, charging his sons to secretly protect Cody on his way home. 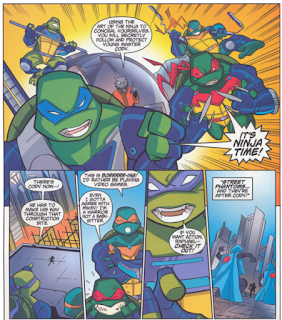 The Turtles quickly butt heads with the Street Phantoms at the construction site, taking them down one-by-one without Cody so much as noticing either group.  Cody follows the route back to O'Neil Tech through the sewers, but finds he has to shimmy across a deep river of water by clinging to an overhanging pipe.  More Phantoms are ready to snatch him up, but the Turtles get to them first. 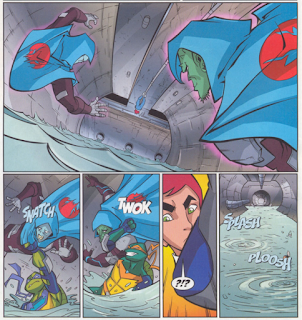 Back at O'Neil Tech, Serling is dusting when he notices the "spider".  He immediately smashes it and the feedback gives Jammerhead a splitting headache.  Cody soon returns home, much to Serling's relief, and delivers his unharmed egg to Splinter.  Cody asks why the Turtles aren't there to greet him and he reveals that they're all napping in the living room, as they had a much more "challenging" day.

Hey, a Street Phantoms story!  They've recently been making a comeback in the pages of IDW's TMNT comic; as I write this, we're knee-deep in the "Chasing Phantoms" arc which is all about them.  While they were played for comic relief like most of the villains in Fast Forward, they had a cool name and look and gimmick and certainly the potential to be a formidable faction of villains.  IDW's been doing good stuff with them and they had their moments in the Fast Forward cartoon.

But they were still inept comedy relief antagonists in that show and it reflects on the pages of this comic.  They're dispatched with ease and Jammerhead gets his just desserts.  At no point are they played up as anything approaching a threat, except maybe to Cody, and even then he doesn't even know they're out to get him.  This is one of their more pathetic ventures.

The story follows the beats of most of these UK strips; a comedic setup leading into a droll punchline.  I have a metric ton of UK TMNT short strips to review and it's hard to work up the enthusiasm when so many of them are carbon copies of each other.  I'm trying, though; believe me.

Andres Ponce offers some nice artwork that endeavors to get the most out of the script.  He adds a couple, uh, "anime-isms" here and there that look really out of place with the otherwise Western aesthetic.  They only pop up in about two panels, but I'm left wondering why he bothered.  His layouts look nice, and despite there being not so much as a trace of conflict in the story (again, the Street Phantoms are never a threat), he manages to make the action look kinetic and interesting.

Anyway, to end this review, here's one of the issue's photo-comics: 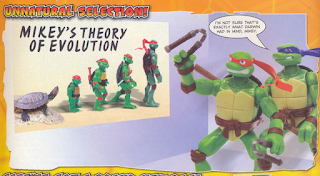