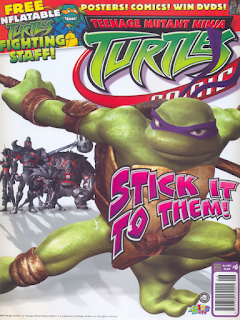 "Rise of the Robots"

At Cody's pad, the Turtles decide to test Donatello's new security system on Serling.  The booby trap works, but Serling winds up hanging upside down from the ceiling.  Cody has the Turtles cut him down, but as soon as Serling is released he goes bonkers and attacks them.  The Turtles want to trash Serling, but Cody suspects foul play and puts up a signal-blocking field around the building. 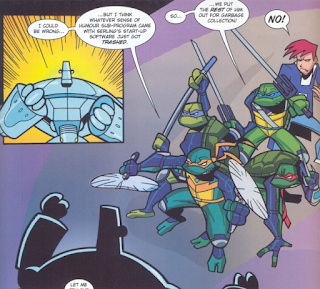 Serling comes to his senses, but one peek out the window reveals that all the robots in New Manhattan are turning against humanity.  Cody deduces that a signal is being broadcast to corrupt the robots and whips up a signal-filter device to find the source.  However, only Serling can power the device, meaning he'll have to team up with the Turtles.

Serling eventually leads the Turtles to an abandoned TV studio, all the while receiving bits and pieces of the rebellion signal, causing him to sporadically bonk Raphael on the head.  Inside, they're greeted by the skeletal robot Cyren.  He sent out the signal in the hopes of turning his "enslaved" brothers against their fleshy "masters".  Cyren sends his robot guards to fight the Turtles while beseeching Serling to join his cause.  Serling walks toward the scaffolding Cyren is standing on, seemingly betraying the Turtles, only to topple it and declare his loyalty to Cody. 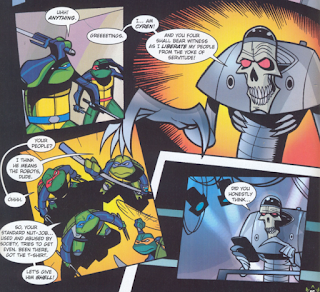 Cyren falls, crushing the signal device with his landing.  The robot guards are destroyed and the Turtles take Cyren into custody.  Later, back at Cody's place, Cody looks over the signal-filter and insists that it was in perfect working order, meaning that no traces of the rebellion signal could have possibly caused Serling to bonk Raph on the head.  Raph angrily calls for Serling while brandishing his sais.

This was a pretty ho-hum, cornball plot and lousy even by the standards of the Titan TMNT magazine.  I don't expect much from these short strips, but they really ought to be better than this.

Furman fills the dialogue with lots of puns and catch-phrase-y asides.  The script doesn't lend itself to the voices of the 4Kids Turtles, and much like Furman's last issue, feels like he had the '80s Turtles in mind when he wrote it.  The story is dry, the jokes are dryer and although "zombie robot" is a cool idea for a villain, Cyren comes and goes so quickly he leaves next to no impression.

Diego Jourdan is not a bad artist, but his work in this issue appears tremendously rushed.  Characters are flat, proportions and perspective are grotesquely off (no matter what angle you're looking at the Turtles, they never have necks), and the environments are under-detailed and not in a "stylized" sort of way.  This looks very amateurish, which is something Jourdan isn't.

So yeah, this one wasn't a good example of anybody's ability.  Even the letterer fucks up, assigning the wrong balloons to the wrong characters.  And wait, the letterer was Andrew Wildman?  So this issue had the Furman/Wildman team that made the old '80s Transformers comic so fuckin' awesome and this comic STILL turned out like shit?  Jeez, Fast Forward really was a black hole of quality.