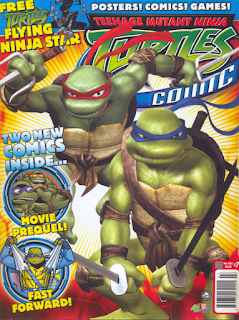 In Upper Manhattan, the Turtles and Cody are on their way to a civic reception (clad in tuxes) when their limo begins crossing a bridge.  Suddenly, several cars rain down on top of them and a flying man begins screaming about revenge.  Cody recognizes him as Horatio Crush, a former O'Neil Tech scientist who was fired for stealing property.  He also recognizes the outfit he's wearing as a prototype Null Gravity Suit. 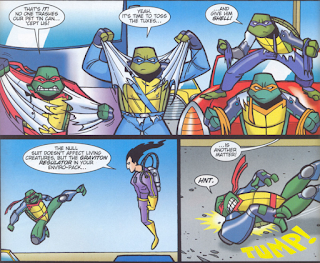 Crush drops a car on the limo just as the Turtles and Cody escape, but Serling isn't so lucky.  The Turtle lose their tuxes and attack, learning that the Null Gravity Suit cannot affect living matter.  However, Crush CAN control the gravity of the enviro-packs the Turtles are wearing as well as all the concrete around them.  Crush sends Michelangelo floating into the sky, embeds Raphael in a crater in the street, and sends Leonardo and Donatello plummeting to one of the lower bridges. 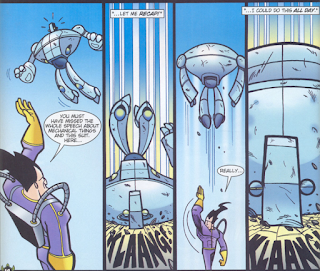 Crush then menaces Cody, only for Serling to climb out of the limo wreckage and come between them.  Crush begins slamming Serling against the street repeatedly, but the robot won't stand down.  Meanwhile, Leo and Don land in an open bin of compost and decide that the only way to beat Crush is to ditch their enviro-packs.  Mikey then splashes down in the compost next to them, having gotten the same idea.

The Turtles return to the upper bridge just as Raph finishes taking off his enviro-pack, too.  They rush Crush from all sides and begin cutting the cables on his Null Gravity Suit.  Eventually, the device explodes, leaving Crush in nothing but his underwear. 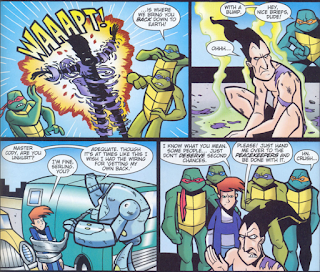 As Crush is taken away by the police, Cody suggests they can still make the reception on time.  However, the Turtles reveal that they tore up their tuxes in battle, so they aren't going anywhere but home.

*This is the third issue in a row to have a publication date of November, 2007.  I'm thinking the copy editor was a little mixed up.

Whew, this is an "If you can't say anything nice..." scenario if there ever was one.  The art, the story, the dialogue... The less said about any of it, the better.

If I had to think of something positive to say, I suppose it's that the villain Crush has some potential.  He's basically a copy of Graviton from Marvel Comics, but I always liked the idea of manipulating someone else's gravity as a super power.  He uses the godly ability to minimal effect in this story, but it was just a short comic strip for little kids.  If he was a REAL threat then this comic wouldn't have been able to end at 10 pages.

There's absolutely nothing else to say about this story that doesn't involve cruel adjectives, so I'm going to step out now and hope the next issue of TMNT Comic is a little better.