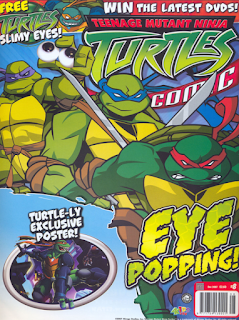 On a satellite out in space, the Turtles prepare to win the annual Space Race.  Their main opponent scoffs at them, insisting that HE wins every year.  He then slinks into the shadows and meets with Darius Dun, who pays him to make sure the Turtles never cross the finish line. 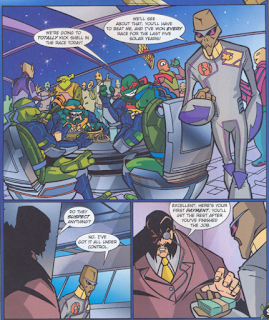 Later, the Turtles take their seats in the racing ship Donatello designed as Cody and Splinter call to wish them luck.  Meanwhile, the opponent slinks around the engine room, installs a sabotage device and then transmats back to his own ship.  The lights go green and the Turtles take off, but seconds into the race, the engine goes dead.  Donnie heads down to the engine room to see what happened and tells his brothers to sit tight. 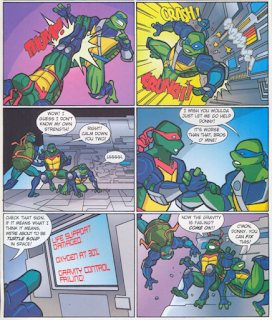 Leonardo tries to go down to help Donnie, but Raphael won't let him.  Instead, Raph wants to spar and tackles Leo into a console.  The damage causes their gravity and oxygen levels to go offline and in minutes they'll all die.  In the engine room, Donnie finds the sabotage device and begins rewiring it.  Back on the bridge, Michelangelo decides to spend his last few seconds alive drinking a soda.  The fizz from the soda floats into the broken console and causes it to spark, miraculously reconnecting the life support and gravity systems.  At the same time, Donnie fixes the engines. 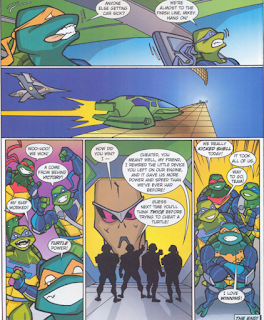 The Turtles get back in their seats and Donnie goes full throttle, sending their ship blasting past the competition and across the finish line, winning.  The opponent calls them, demanding to know how they did it.  Donnie reveals that he rerouted the power from the sabotage device into the engines, sending them into overdrive and giving them the boost they needed to win.

*This issue also contained an interview with Steve Murphy and a poster of Michelangelo vs. Jammerhead, among it's more notable extra features.

What an absolute piece of shit.  I know I said the last issue of the UK TMNT Comic from Titan was bad, but this one is WORSE.  Just for different reasons.

Alright, first I WILL confess that the art is very good.  Andres Ponce does a wonderful job on the pencils, and the action and staging all look great.  It's a stark contrast to the horrendously amateurish art from last issue.  I certainly hope Titan didn't pay all of their artists the same page rate, because clearly some were worth more than others.

Unfortunately, what good is excellent pencils when the coloring and lettering is completely incoherent?  Junior Tomlin and Andrew Wildman cannot seem to tell Michelangelo and Raphael apart, so the entire sequence where Raph tries to spar with Leo and Mikey breaks it up, and the bit where Mikey and Donnie argue over who really fixed the ship... It's just incomprehensible.  Did they even read the script before doing their jobs?

And on the subject of the script: What the HELL, Jake Black?  It's like midway through writing the thing, Black put his pay through a pounds-to-dollars currency exchange calculator, realized he was getting screwed, and just gave the fuck up.  WHY does Raph try to stop Leo from fixing the ship so he can spar?  He isn't that much of a moron.  All it does is facilitate the suspense with the life support systems, but is it really suspense when the Turtles nearly kill themselves via their own stupidity?  And the "suspense" is resolved by some spontaneous bullshit involving soda bubbles?  And for god's sake, the villain of the issue doesn't even get a NAME!

I dunno, man.  I've tried to be nice about these comics but holy fuck, they started out kinda bad and they've only been getting worse.  I know the UK has a decades-long tradition of shitting out zero-effort Ninja Turtles comics to tie-in with the cartoons, and I should set my expectations lower than the Dead Sea, but for crying out loud...

Anyway, I guess I enjoyed this: 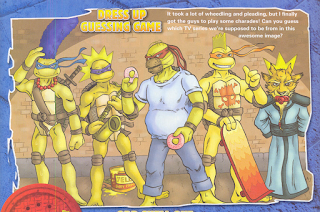