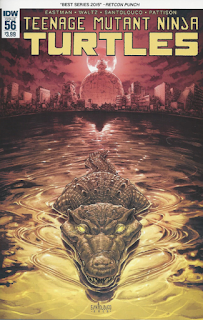 In a cave on Burnow Island, two unseen figures struggle to breath in the newly terraformed atmosphere.  They agree that they have to strike immediately or they’ll never have the chance.

In Harold’s lab, the Turtles convene with their scientist friend.  Leonardo asks if he’s had any luck reverse-engineering the cloak they stole from the Street Phantoms, but alas, his mysterious ex-partner stole much of the designs and data on how the cloaks work; he’s pretty much starting from scratch.  Harold then fits them with breathing apparatuses and sends them through the portal to Burnow Island. 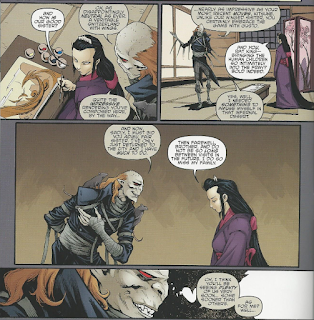 At Foot HQ, the Rat King meets with his sister, Kitsune.  He compliments her on her recent moves involving the Foot Clan and informs her that their sibling, Aka, is doing well (albeit remaining neutral in the game).  Kitsune expresses concern with the Rat King addressing the human children directly, but he assures her it was all according to his strategy.  Elsewhere, Splinter meets with Jennika, who is eager to regain her honor among the Foot Clan.  To test her, Splinter assigns her to guard the tomb of the Shredder.

On Burnow Island, the Turtles promise to help the Fugitoid revive all of the Utroms in stasis, as they’re mostly just innocent civilians who had nothing to do with General Krang’s evildoing.  Fugitoid informs them that they’ll have help in the endeavor and introduces the Turtles to the mutant alligator Leatherhead. 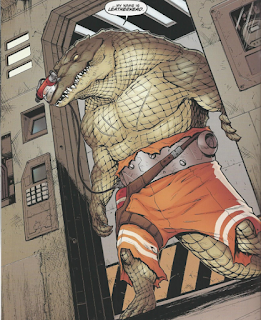 Leatherhead explains that centuries ago, he was just a normal alligator until one day when pirates unloaded canisters of ooze and mutagen into his swamp.  He mutated, and with his newfound intelligence, gathered up the canisters for safekeeping.  Over the decades, he hid from humanity, though those that glimpsed him gave him the name “Leatherhead of the Lagoon”.  However, once the island was terraformed and he found he could not survive in the new atmosphere, he approached the Fugitoid and offered to help.

Fugitoid explains that in exchange for Leatherhead’s stash of ooze, which was instrumental in returning Donatello to his original body, they made a bargain.  With nowhere else to go, Leatherhead wants to live in New York City.  The Turtles are unsure about this, but accept that they don’t really have a choice and agree to the terms.

Together, the Turtles, Fugitoid and Leatherhead begin reviving the Utroms from their stasis pods.  That is, all save for one named Ch’rell, whom Fugitoid explains is the only violent warrior among the otherwise peaceful politicians and civilians.  The rest of the Utroms are successfully revived, though still unconscious, and the Turtles take them to more comfortable rooms to recover. 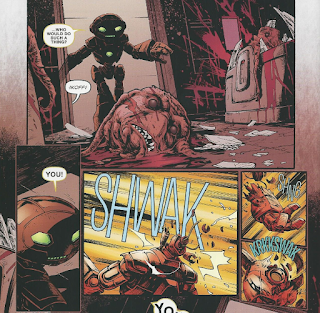 Three hours later, Fugitoid performs a security and status check on the Utroms and finds a room where all the aliens have been murdered.  He’s then attacked by a mysterious assailant, who punches off his head.

*Donatello left Metalhead and was returned to his old body in TMNT (IDW) #50.

*General Krang was defeated and Burnow Island was terraformed in TMNT (IDW) #44.

*The Rat King meddled with Casey and April in TMNT: Casey & April #4.

*Jennika lost her rank as a Foot Assassin in TMNT (IDW) #52.  Leo obtained the Street Phantom cloak in that same issue.

*Leatherhead was mutated in TMNT: Turtles in Time #3.  He revealed himself to Fugitoid and Harold in TMNT (IDW) #49.

*One of the Utroms name-dropped, Ma'Riell, appeared in a flashback in TMNT (IDW) #50.

*This issue was originally published with 2 pages of concept art by Mateus Santolouco, showcasing his design process for Leatherhead.

I don’t think there’s a character whom IDW TMNT fans have been anticipating more anxiously than Leatherhead.  Some might even think that IDW took TOO LONG to properly introduce him to their continuity.  Well, DID they?  Let’s find out.

The Mirage comics began in May of 1984.  Leatherhead was first introduced to the world in August of 1988.  So that’s 4 years and 3 months between the start of the continuity and his introduction.

The Fred Wolf cartoon began in December of 1987.  Leatherhead first appeared in November of 1989.  So that’s 1 year and 11 months.

The Archie comics began in August of 1988.  Leatherhead first appeared in November of 1989.  That’s 1 year and 3 months.

IDW does technically have the longest wait between “Start” and “Leatherhead”, narrowly inching out Mirage (who can claim some slack because they had to fucking INVENT Leatherhead in the first place).  So yeah, maybe they took longer to get to him than anybody else, but I’m fine with that.  The wait to see one of the most fan-favorite mutants in the franchise may have been agonizing, but in the meantime we’ve gotten a dozen or more DIFFERENT fan-favorite characters.  So it’s not like IDW’s been holding out on us.

Leatherhead’s introduction came when it was organic to the narrative.  I mean, can you imagine if they’d tried to shoehorn him into “City Fall” or “Northampton”?  Those storylines were packed enough as it is without a hastily introduced gator-man running wild all over the plot.  We took the long road to Leatherhead, but it was well worth the wait.

Because Santolouco made him look pretty freakin’ rad.

I mean, yeah, he’s still just an anthropomorphic gator and it’s hard to believe there’s anything new that can be done with that, but Santolouco’s pencils (with Pattison’s glorious colors) make a character we’ve seen a hundred times over the past 28 years look intense and imposing.  I like the pants and belt, which keep him from looking too bland (something the Nickelodeon Leatherhead suffers from), but more importantly, Santolouco’s character study shows him wearing the Cajun swamp-trapper hat. 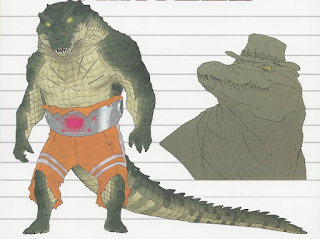 He had better wear that thing in the comic is all I’m saying.

Now, Leatherhead, as a character, is someone I get excited about even though I know I probably… shouldn’t?  You see, Leatherhead, in his classic Mirage-based incarnation, is very much a one trick pony.  He’s intelligent, but gets mad and goes on berserker rampages, then apologizes once he’s calmed down and the cycle repeats.  It’s a Jekyll/Hyde, Bruce Banner/Hulk sort of thing and it’s, well, it’s kind of boring.

That’s one of the reasons why I hold a special place in my heart for the Fred Wolf and Archie Leatherhead; the Cajun swamp-trapper guy that would talk about gumbo and say “I guarantee!” for no discernible reason.  It may have been a goofy gimmick, but it beat the hell out of the mood-swinging shtick we’ve gotten from him in Mirage, 4Kids and Nick.

More troublesome, perhaps, is that the mood-swinging “smart guy but a psycho brute when he’s angry” shtick has already been claimed by another IDW character.  Slash has been working that side of the street for a while now, so what exactly is Leatherhead gonna do?

There may be more to Leatherhead than meets the eye, however.  He seems too good to be true, popping in to help the Fugitoid right in the nick of time and wanting only the opportunity to go to New York as payment for his otherwise altruistic services.  There’s something a little disingenuous about him and it may be that the orange pants look like half of a prisoner’s jumpsuit and the metal belt looks like a heavy duty restraining harness.  I’m betting he might turn out to be something of a scheming foe for the Turtles rather than a goody two-shoes, or at least that’s what I’m hoping.

Other non-gator-related plot points dropped in this issue involve the Rat King and Kitsune doing the same thing they’ve been doing for over 20 issues now; they’re masterminding everything and nobody knows it!  I sure hope they do something besides talk about how clever they are sometime this century.

But anyway: Ch’rell!  His introduction may be more exciting than Leatherhead’s.  With Oroku Saki dead for the time being, and Krang off in space-jail, will Ch’rell rise to fill both their shoes?  Man, that’d be something.

And the intruders on Burnow Island, to hazard a guess, I’m going to say are Tragg and Granitor.  Who else could punch the head off of a robot?  And hey, with their boss in space-jail, maybe they'll spring Ch'rell and start taking orders from a new scary Utrom despot?  The possibilities are limitless.

The opening chapter of this next three-part arc consists of a lot of introductory stuff, but that’s to be expected.  It still builds off of everything that came before it, as the girth of this issue’s Turtle Tips indicates, and we’re left with many exciting introductions and reintroductions.  While it’s really a lot of talking, Santolouco is such a gem he even manages to make THAT look dynamic and lively.  And for all you Leatherhead fans, well, FINALLY.

Grade: A (as in, “And now we can all start bugging IDW to introduce Pizza Face.  He ought to be next on the list.”)