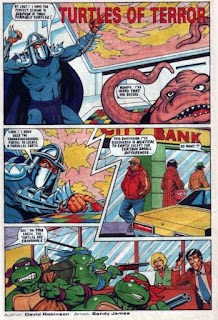 In the Technodrome, the Shredder unveils his latest scheme to Krang.  Using the transdimensional portal, he has discovered an alternate universe where the Hero Turtles are known as the Evil Turtles.  Using the portal, Shredder brings the Evil Turtles to the Technodrome and orders them to do his bidding, otherwise he'll never send them back to their universe.  His orders are simple: They are to infiltrate the lair of the Hero Turtles, take them down one-by-one and then bring them to the Technodrome. 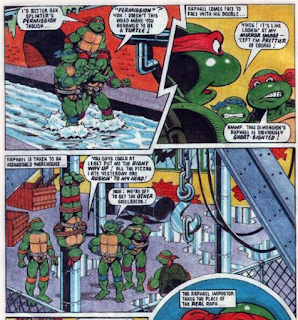 In the lair, the Hero Turtles and Splinter leave for an evening of pizza-scarfing, but Raphael must stay behind and practice his meditation techniques (as punishment for falling asleep during practice earlier).  Shortly, Evil Donatello and Evil Leonardo enter the lair and tell Raph that they want him to come with them for pizza.  Raph sneaks out with them, but is ambushed by the rest of the Evil Turtles.  They take him to an abandoned warehouse and chain him up. 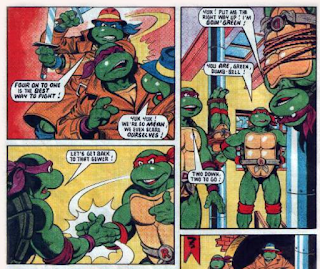 Evil Raph then takes the real Raph's place and returns to the lair.  The Hero Turtles and Splinter return, but Donnie remembers he needs to give April an update on their latest adventures for her news report.  Evil Raph offers to go with him and as soon as they're out of the lair, the other Evil Turtles ambush Donnie and take him back to the warehouse. 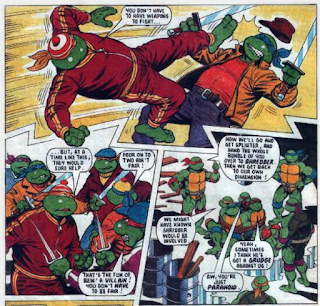 Evil Raph and Evil Donnie return to the lair and wait until morning to draw the rest of the Hero Turtles out.  After breakfast, they suggest a jog and bring Mikey and Leo along.  Once they hit the streets, they're ambushed and taken back to the warehouse.  With all four Hero Turtles chained up, the Evil Turtles decide they can take Splinter by force and leave.  The Turtles are helpless until a pair of bums unwittingly enter the warehouse, looking for a place to sleep.  They gladly unchain the Hero Turtles, who rush to save Splinter. 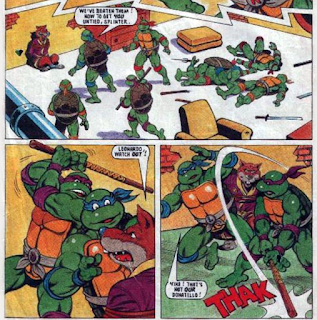 The Hero Turtles arrive at the lair just in time and attack the Evil Turtles.  They overpower them and save Splinter, but before they can take the Evil Turtles to the authorities, Shredder teleports the failures back to their alternate universe.  The Hero Turtles are relieved the adventure is over, but realize that the only reason they were able to succeed was because they were helped by a pair of homeless.  To repay them, the Turtles put on a charity martial arts exhibition at the local homeless shelter to raise money.

*This story was published alongside "Pied Piper".

We've gotten a lot of "evil Turtle" stories over the decades and I wouldn't rank this among the best of them, but it's certainly way more ambitious than most of the comics Fleetway published.  It doesn't rely exclusively on a single dumb gag and it isn't full of ridiculous nonsense (though I'll admit that the ridiculous nonsense is why I like these comics).  It's actually a fairly straight-forward action story, which is unusual for the Fleetway book.

There isn't much intrigue to the plot, which is a consequence of that "straight-forward" thing I was talking about.  Splinter and the Hero Turtles begin to see tells in Evil Donatello when he infiltrates the lair (Evil Don can't fix a broken TV and he's left-handed), but their suspicions never advance to anything that impacts the narrative.  Splinter and the Hero Turtles might as well have been oblivious to the rogues in their house, all the good their suspicions did them.

The deus ex hobo resolution is a bit of good and bad.  The homeless guys coming out of nowhere to help the Turtles and ultimately save the day was a surprise, but one that made sense to the location (it's an abandoned warehouse in New York City, of course bums would want to sleep there).  But then their inclusion sends the story spiraling into a Public Service Announcement in the final pages, which was the bad kind of surprise.

I suppose that my favorite thing about this issue was the tiny tank-tread thing that Krang rides around in: 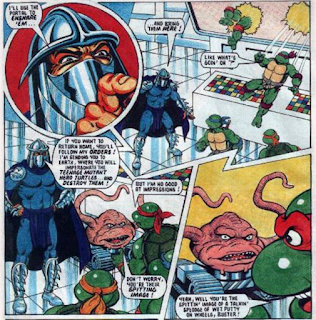 It's so fucking weird.  I mean, Sandy James could have drawn him in his robot body, or his bubble walker, or even that weird little tripod he sat on in the first season of the cartoon.  But no, he drew him with a tank platform.  It's the little things I appreciate the most.