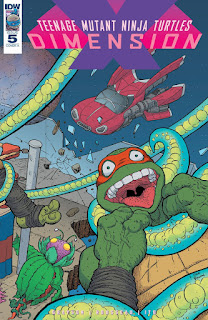 Hakk-R arrives on the planet Totus in search of the final witness, someone named Occuli.  When he sets foot on the garden-world, he is greeted by a floating flower called a Polyglot that welcomes him to the planet, which is actually a single organism.  "Occuli" is not an individual, but a bud which the planet uses as a sight organ.  Hakk-R torches the Occuli, but finds thousands more and decides to torch them all just to be safe. 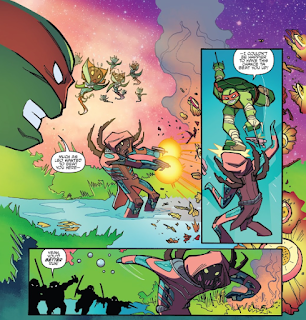 Out in space, Zak and Kala find that their Hot Rod is being pursued by the Malignoid Swarm.  They tell the Turtles that they'll have to drop them off on Totus and lead the swarm away.  The Turtles arrive on Totus and are greeted by a Ployglot.  She gives them the same story, but warns that the planet is off-limits to tourists at the moment due to Hakk-R's attack.  The Turtles find Hakk-R and fight him off, but realize that since Occuli is an organ, not a person, they cannot take it back as a witness.  And since the planet is one single organism, it can't go back with them, either.  The Polyglot says that Krang had tested chemical weapons on Totus and created a biohazardous wasteland.  Leonardo suggests they go there and search for evidence to take to the trial in lieu of a witness. 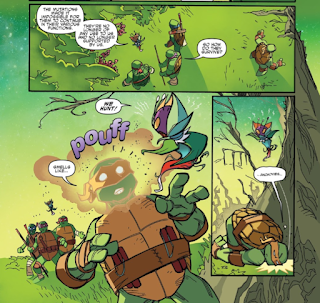 When they get to the wasteland, the Polyglot tells them that the chemicals created mutants among the Totus system; organs such as Polyglots who became disconnected from the planet's hive mind.  Another Polyglot then appears and attacks Mikey with hallucinatory pollin, revealing itself to be one of those mutants and needing to hunt for food.  The Turtles escape the wasteland and the Polyglot cannot follow them, as the rest of Totus' system refuses to let the mutation go any further.

Donnie gets an idea and tells the Polyglot that since it is not long tethered to Totus, it is now a free organism and can go anywhere and do anything it wants.  Realizing this, the Polyglot takes on an individual name, Polyglot-95480 (or "Polly" for short), and accepts the offer to act as a witness against Krang. 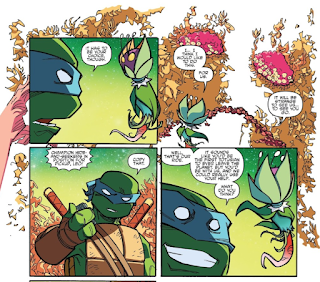 The Turtles are picked up by the Neutrinos, who lost the Malignoids in an asteroid field, and head off.  Meanwhile, Hakk-R reports back to Krang that the witness was just a plant and cannot testify against him in court, so he has nothing to worry about.

*This story is continued from TMNT: Dimension X #4.  The storyline continues into TMNT (IDW) #74.

*The Malignoid swarm was mentioned offhandedly in TMNT (IDW) #73.

*This issue was originally published with 3 variant covers: Cover A by Nick Pitarra, Cover By by Craig Rousseau, and Incentive Cover by Kevin Eastman and Tomi Varga.

This was a pretty weak end to an otherwise decent miniseries. They certainly didn't save the best for last.

I guess I'll say that I've never read anything by Devin Grayson that I've enjoyed.  Her run on Nightwing was a marathon of mediocrity and the only reason anyone remembers it is because of some very stupid things Grayson-herself wrote and said (which she has since apologized for).  Her Ghost Rider miniseries, "The Hammer Lane", was probably the worst Ghost Rider story I've ever read.  And man, Bad Ghost Rider Stories is a pretty competitive field.  To take the top spot in THAT challenge should tell you something.

Her chapter in Dimension X isn't heinously awful, but it falls into that well of mediocrity similar to her Nightwing stuff.  This story is so very boring to read.  And what bugs me is that with a little more finesse, it wouldn't HAVE to be so boring.  For example, we have to get the welcoming shpiel explaining how Totus and its semi-sentient plant organisms work TWICE; first when Hakk-R arrives, then when the Turtles arrive.  And the explanations aren't truncated, we have to hear the whole biology lesson in full both times.  It's wordy and repetitive and drags and drags and drags.

Then there are missed opportunities.  The fight with Hakk-R is almost comically short.  The Turtles seriously just swat him away like a nuisance in a page and a half.  At this point, we've had so many encounters with Hakk-R that I didn't mind the brevity, but the battle is utterly listless and it is the only sequence of action in the entire issue.

Or how about when Mikey gets hit with the hallucinatory pollen?  Wouldn't that have been an opportune time for the visuals to get all trippy as Mikey goes bonkers, maybe allowing artist Craig Rousseau to try something fun and engaging?  As it is, since there's so little going on in this issue, Rousseau's art is blah the whole way through.  But it's hard to blame the guy; he just wasn't given any material to work with.  Although he does seem to have been drawing with the wrong dimensions; the tops of several pages are empty and the colorist has to try and finish the image without any pencil lines.

But alright, alright, alright.  Something nice to say?  Well, Zak and Kala finally, FINALLY get something to say and do.  They have been mannequins throughout this whole mini, so it's nice to be reminded that they can think and talk.  Their subplot with the Malignoid swarm is awarded two pages total in the issue, but at least they get to do something (though Zak is missing his Beatnik lingo).  And the Malignoids, too, get an ominous introduction, though you don't get a great look at them, even in the one panel they appear in.  I'm assuming they'll come into play later down the line, perhaps during the Trial of Krang arc.

As for the Dimension X miniseries as a whole, I think it has a charm to it that I liked more than otherwise.  Bebop and Rocksteady Destroy Everything, last year's weekly miniseries event, was a very different kind of story and you cannot compare it to this year's mini event.  B&R was a crazy roadtrip jam-session sort of thing.  It was scattered and spontaneous but I liked it for those reasons, even if it was all over the place and intentionally confusing and weird.  Dimension X is an episodic anthology.  It's paced and arranged like a Saturday morning cartoon.  Every issue sets up a done-in-one story and the comedy relief villain (Hakk-R) is sent retreating at the end as the Turtles save the day.  Every issue even tries to hammer home a saccharine lesson to the reader (this issue is about family).

It is very formulaic and predictable, but it still led to more hits than duds, I think.  We got some cool characters, we got some cool art and the universe was expanded so much more.  I suppose my ultimate grievance was with Hakk-R.  He was introduced in the main series as this humongously powerful adversary that tossed the Turtles around like they were nothing.  Throughout this miniseries, he's gotten his ass handed to him in increasingly embarrassing ways, diluting the threat he once posed.  I wonder how he will be portrayed when we see him again in the ongoing series?  Will he be back to "untouchable badass" mode, as if this miniseries and his many defeats never happened, or will the ongoing remember that he kinda sucks now?  I guess we'll find out in a few weeks.