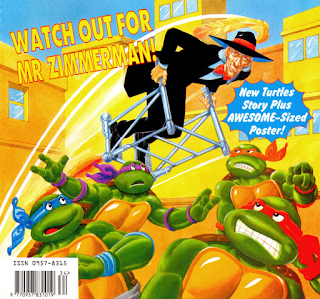 Posted by Mark Pellegrini at 11:16 AM

Hooray! Looking forward to this series! I like most of these silly stories and especially the rotating artists, but it's really hard to remember off the top of my head which comic was in what issue, so this index will be much appreciated.

I don't remember who published them back in the day, but there were also story books retelling both cartoon episodes and Archie Comics content (I have one which re-uses the story of the Turtles meeting Man Ray, but with new/updated pencils). Based on the artwork it may have been published by Fleetway as well. Or Fleetway licensed their artwork to other companies, as the European TMNT Adventures comic also used several of the Fleetway covers and comics.

Anyone who liked/likes the goofy side of the Turtles, as shown in the Fred Wolf series, will love these Fleetway comics. It's all very bright and light-hearted. It's basically the Turtles continuously fighting Shredder, who came up with a yet another silly scheme. You can tell these stories were drawn by artists who had never even been to New York, because much of the 'scenery' always looked a bit off... As if they had Manchester in mind when they were drawing it, in stead of Manhattan. But that's charming.

84 issues? so there is an official TMNT comic out there with more issues than TMNT Adventures? I guess it's mainly reprints, but still, I guess that record doesn't belong to TMNT Adventures (well, it won't matter in a couple years anyway, as long as IDW sticks to it's numbering and doesn't pull a New 52/Marvel Now!/DC Rebirth... not that it would have any reason to).

Now I know where the not too good comics we had in France back in the day are from.
Why did French publishers decide to translate these while so much better material was available :)?

Perhaps this page could be turned into a Foreign Comics index, since that would have a broader range than just the Fleetway issues.